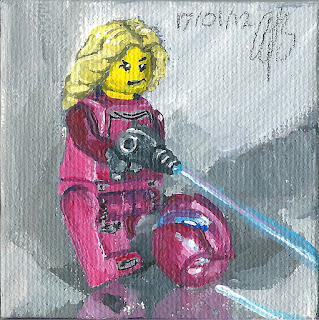 This is one determined lady. And she's wearing silver lipstick - not to mention that pink space suit (she was meant to be holding the helmet, but it didn't quite work). I took an artistic liberty with her weapon; in reality, it's a long, blue, transparent cylinder that sticks in the end of the space gun. But when it came to painting it, I thought it would be much more fun to give it the laser gun treatment beloved of sci-fi film makers. I added a suitable reflection on the shiny floor, too.

I wonder what she's shooting at. It's a bit low to be a conventional space-enemy. I quite like the idea that she might be using her gun to create a sculpture out of space rock, or something like that. What do you think she's sculpting?

Now, the official name of this figure is "Intergalactic Girl", but I have named the painting Space Girl because I just love The Imagined Village's version of the song, "Space Girl":


Actually, I think the song suggests an answer to my question about what she's sculpting. This "silver robot". Perhaps.