Posted by Amanda Bates at 19:04 No comments: 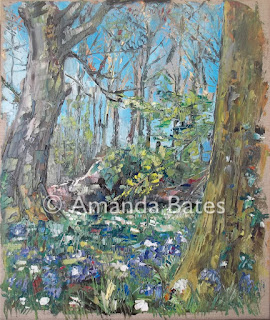 It's not often that I get to go to Cornwall during the bluebell season, but this weekend, I was in Cornwall and I did go down to the woods to paint. Again, though, I was too early for the full blue-carpet effect, but this did allow for wood anemones and - in the distance - wild garlic to peep through.

Posted by Amanda Bates at 19:00 No comments: 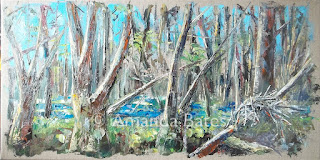 It's spring, and the bluebells are coming out. Time to go painting...

This was painted,on Wednesday, on the edge of Harriden's Great Copse, a hunting wood with a public footpath through it. Despite the fact that Wednesday was far and away the best day of the week, it was cold out there. Sitting in the shade didn't help. I did as much as I could and finished the painting from memory in the studio.

Posted by Amanda Bates at 12:56 No comments:

Boxed is turning into a series. Here is the second woodcut - with the woodblock in its clean, unprinted state, then with ink on it...  and finally, a slightly disppointing test print (hand pressed in haste).

Unfortunately, the wood of the block for Boxed developed two flaws and I'm not happy with the resulting white lines across the image. That block has been retired and there are no truly satisfactory prints.

Posted by Amanda Bates at 21:33 No comments:

This is the text for the article published in South Central.

The Open Studios in West Berkshire and North Hampshire has run annually in May since 1988. Though its primary purpose is to provide a platform for the public to meet artists in their own work spaces, and perhaps buy some of the artists' work, OS WBNH extends beyond that with several “outreach” activities, including a schools education program and free public workshops, not to mention the various exhibitions held throughout the year.

It takes a lot of work to make this all happen, and it's all done by volunteers.

I spoke to the chair of the committee, John Brazendale. This is John's first year as chair , but he's been involved with the scheme for many years. John himself is a ceramicist, a graduate of St Martin's College, London, and a former teacher.

I joined the scheme last year, not long after its founder Pat Eastop died. I never met her. Knowing that she was key to understanding OS WBNH, I asked John about Pat, who was also a school teacher.

I knew Pat for over 40 years. I joined her committee soon after I retired and we worked together, developing the scheme. She worked 24/7 on Open Studios, it was 'her baby', she knew every artist and she wanted to help each and every one of them to produce their best work and give them the opportunity to show it.

What strikes me more and more this year is the range of activities we offer the community. This is a major part of [Pat's] legacy, which we intend to continue. Over the past year I've researched how other schemes work. I don't know of any other that offers what OS WBNH does.


One of the factors that sets WB&NHOS apart is its reputation for quality. This starts with the artists, who have all been accredited by the committee. I asked, “How do the committee make those difficult selection decisions?”

The OS WBNH Accreditation Process is a long process which most schemes don't use. Pat felt very strongly that the standards of OS must be maintained.

Five or six committee members who have gone through the Art School system scrutinise the art works and the supporting documentation. They use the criteria agreed by the committee and work independently in their decisions before casting their votes. Borderline candidates will be discussed in detail.

19 new artists were accredited last year. One artist was asked to reapply for 2017. When this happens, I offer a meeting with the artist to explain our decision.

People have said to me, how can they do that? It's so subjective!

I'm afraid they don't understand how we judge the quality of art works. They're probably not aware of the criteria we use to make decisions. Everyone can say 'I like that'. What everybody can't do is decide if it's a good piece of art work, whether they like it or not.
It's easy to allow every artist into a scheme, far less work, far less effort.
This is where some people get confused, 'I like it' doesn't mean it's good art.

There are a lot of very talented artists involved in the scheme. It is a vibrant, sociable and diverse organisation that enthuses and inspires its members, helping them produce art to the best of their abilities, art that is worth seeing and owning. It's no wonder that OS WBNH is held in high regard.

I'm proud to be part of it.


What's on in West Berkshire and North Hampshire
Open Studios 2016 runs 30 April to 22 May.
The 2016 Web site and directory will be published on 2 April 2016. The directory can be downloaded from the Web site or picked up in hard copy from libraries and other public places in the West Berkshire and North Hampshire area.
http://www.open-studios.org.uk/


The key event is INSIGHT, the central showcase exhibition at New Greenham Arts, where you can see work by every participating artist. The show is usually eclectic but well presented in the dedicated gallery space. INSIGHT attracts over 1100 visitors each year.

There will also be several Satellite Exhibitions around the area. Venues include the Watermill Theatre, Arlington Arts, Newbury Library and Open Hand Open Space in Reading. Exhibitions may be solo or group shows, including work done by local schools as well as Open Studio artists. New this year is the North Hampshire Artists exhibition at Sherfield Park near Basingstoke.
(Organised by Anne Jones and by independent groups of Open Studios artists)

West Berkshire Museum in Newbury will once again be hosting the Cover 2 Cover exhibition, now in its fourth year. This will be the culmination of several months' work using themed sketchbooks, exchanged between artists, and the results are usually astounding as the artists push their imagination and abilities to keep up with the challenge.
(Organised by Isabel Carmona)

Free Open Studio Workshops will be held across the area during May and June. They are fully subscribed every year. Details are announced with the publication of the directory on 2 April.
(Organised by Jane Vaidya)

Posted by Amanda Bates at 23:28 No comments:

The Artikinesis Art Colouring Book has less than a week of Kickstarter-funding left. This means that, if you wanted to pledge a small sum of money to help get it printed (and maybe claim a small reward at the same time), you will need to do so before midnight on Thursday 14 April.

The book will be perfect bound (not spiral bound - that's my sketchbook in the illustration!) and will contain 50 black and white drawings, printed on one side of 170gsm paper. Each artist is supplying ten drawings.

If you want to claim a book as your reward, you can have it straight for the retail price of £10, signed (by all of us) for £12, or signed and with your name on the back cover for £25 (as I write, only five slots remain for this option). Each preordered book comes with digital goodies (an extra drawing and a copy of the "K" files) that won't be available after the funding period.

Postage is £3 for the UK and £15 for the rest of the world. (If we don't incur any delivery costs, we'll happily refund the postage when we give you your book in person.)

And if we don't get the funding, we don't print, and any pledges that you might have made won't get claimed.

Just in case you do want to make a pledge, I've included a handy button here that will take you directly to the page on Kickstarter where you can choose your pledge amount and reward.

Posted by Amanda Bates at 20:59 No comments: 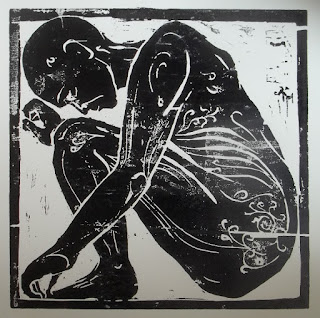 Today, I particpated in a multi-artist printing workshop at City Arts. This is a 28 cm square woodcut created for the occasion; I cut the block yesterday afternoon and fnished it this morning. The design was drawn directly onto the block from imagnation.

There will be no more than 10 prints made from this block.
Posted by Amanda Bates at 15:27 No comments: 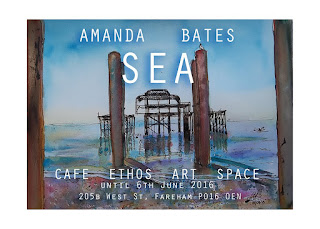 Posted by Amanda Bates at 15:09 No comments: