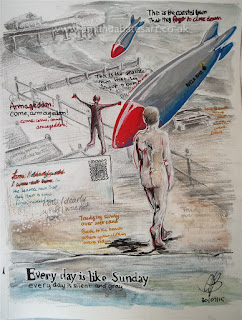 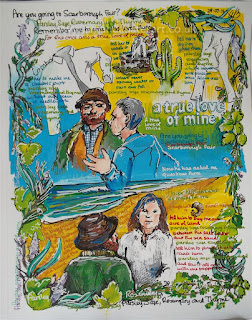 A shirt with no seams, a well with no water... nowt so strange as folk, is there? Unless you are Simon and Garfunkel, Scarborough Fair usually includes a female response. Well, she says, if he wants that shirt, I want an acre of land... between the sea and the sand... and he can plough it, sow a peppercorn all over it, and harvest it, too!

In a Dead End World 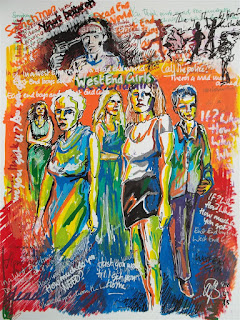 For All She Knows 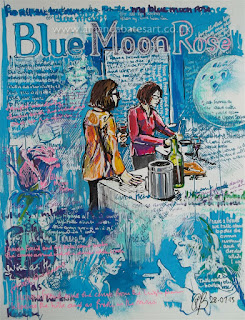 A song about friendship.

I am... sitting in the diner 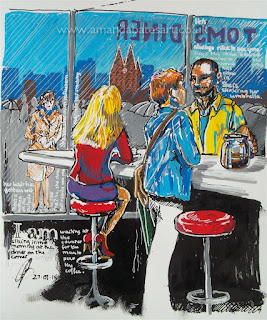 Actually, I was sitting in the diner (on the A339) earlier today. And it was raining outside. 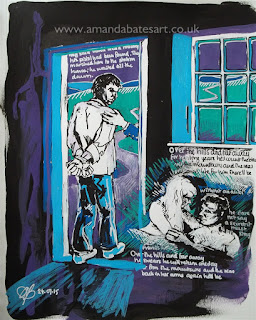 Not the traditional number used as the theme for the TV adaptation of Bernard Cornwell's Sharpe series, but an original song by Gary Moore - guitarist with Thin Lizzy, so this song follows on nicely from Whiskey in the Jar (o!).

Whack for my daddy-o 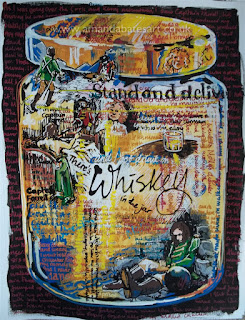 Whisky in The Jar. In a jar. More or less. As popularised by Thin Lizzy...

Posted by Amanda Bates at 23:16 No comments: 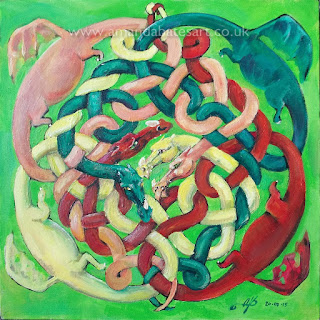 An imaginary piece, a companion of sorts to Dragonheart.

Posted by Amanda Bates at 00:03 No comments:

Bodies in the Wishing Well 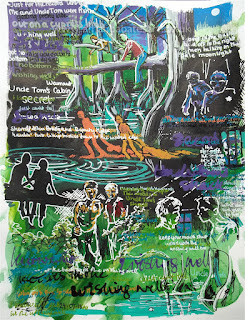 This is a request, drawn for a friend.

End of the Summer Term 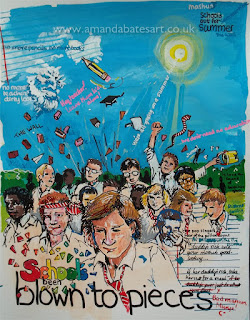 On Wednesday, it was the last day of the academic year at my children's school. And, as everybody knows, there's only one song that fits...

Except it turned out that there were several. I think they call it a mash-up. And for some reason, Harry Potter turned up as well. As for the pretty boy in the front - I'm not entirely sure who he is, but he might be an actor.

Alice Cooper, "School's Out"
Pink Floyd, "The Wall"
Cliff Richard, "We're all Going on a Summer Holiday"
Nick Lowe, "I Love the Sound of Breaking Glass"
The Divine Comedy, "The Pop Singer's Fear of the Pollen Count"
Janis Joplin or Billie Holiday, "Summertime"
Mungo Jerry, "In the Summertime"

Bad Manners turned up at the end but didn't actually give me a song. Eddie Cochran was hanging around in the sky with his Summertime Blues, but didn't get a speaking part. Madonna went on "Holiday" to "La Isla Bonita" so she isn't there at all.
Posted by Amanda Bates at 11:34 No comments: 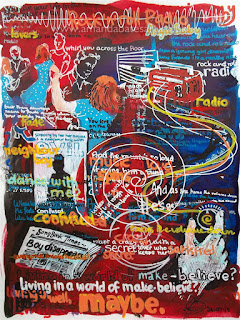 Living in  a World of Make-Believe? Well, maybe. 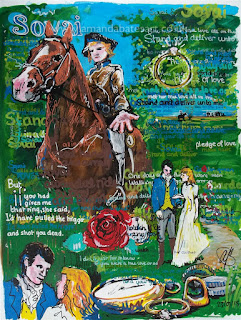 Sovai, or Sovay, is a folk song in which nobody dies. Cross-dressing, highway robbery, deception, gold and the test of true love all feature, however.

Posted by Amanda Bates at 09:14 No comments: 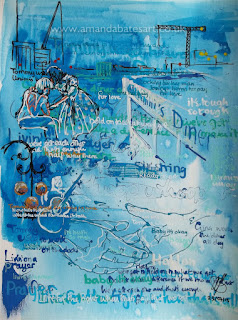 You do know this song. Everybody knows this song.

Posted by Amanda Bates at 00:33 No comments: 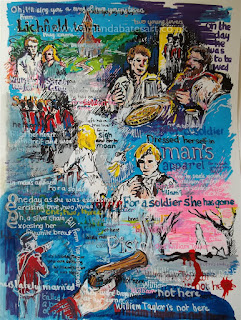 Cross-dressin', cheatin' lovers, revenge served boody and cold ... it's got to be a folk song. And it is. 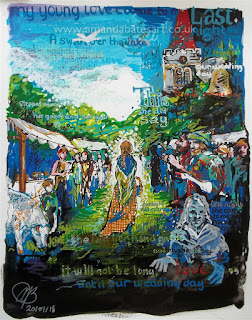 Here is the second new song drawing. The title is a line from some versions of the song, which, being in the folk tradition, has several variants.

Robin Hood and his Goose are largely irrelevant, especially as Goose Fair is, of course, a Nottingham tradition and this fair is an Irish one.

< This Lonely Boy, in the Rain
Posted by Amanda Bates at 10:36 No comments:

This Lonely Boy, in the Rain 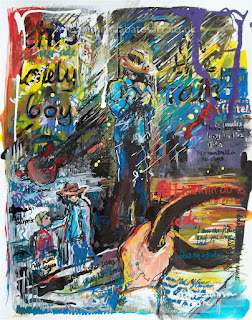 Here is the first new song drawing - it shouldn't be difficult to recognise the song if you are familiar with it (and it was a fairly big hit in the mid 80s).

A while back, as part of the 2015 Cover 2 Cover sketchbook exchange project, I interpreted a couple of songs as drawings. They were for the Embraces theme, which didn't quite make it to this blog. So, here they are...


It was fun, and I've been thinking about doing more of them. The new drawings will get their own posts...

The exhibition space at the New Greenham Tandoori, run by the West Berkshire and North Hampshire Open Studios team, is roughly nine metres long. Ten of my Cornish knife-painted oils are on display there; the very widest view that I could manage only encompasses nine, so I've included two photographs. 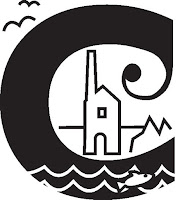 The exhibition is on now and will run until October. The restaurant is open daily between 12 noon - 2pm and 5.30 - 11.30pm, closed Friday lunchtime. I gather that it is perfectly acceptable to wander in just to look at the art as long as they aren't very busy.
Posted by Amanda Bates at 22:46 No comments: 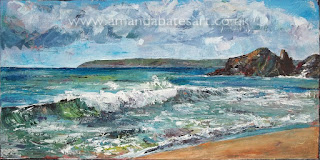 The weather has been hot enough of late that the layers of this painting were pretty much dry after a day or two. I've been working on this in very short sessions, in between doing other, largely less interesting things and rediscovering Life Without the Internet (not by choice). 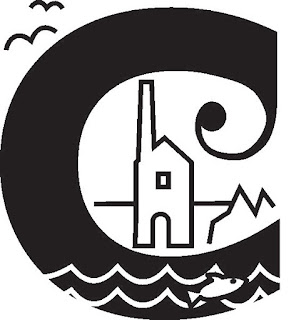 This is an Initial (the sort of thing that medieval illuminated manuscripts had at the beginning of chapters, but more modern and monochrome). I designed it for the artist's statement that I wrote to accompany my imminent solo exhibition at a local restaurant...


Our local arts centre (New Greenham Arts near Newbury) has an Indian restaurant conveniently situated in the same building. Not only is the potential there for hungry artists and arts fans to eat their fill at the New Greenham Tandoori, but there is also a dedicated exhibition space, run from the arts centre.


I have been asked to exhibit there. As you might imagine, I jumped at the opportunity. So, on Friday this week, I shall be taking a number of my knife-painted Images of Cornwall along to hang on the restaurant's wall.

The exhibition will run from 11th July, and the restaurant is open daily between 12 noon - 2pm and 5.30 - 11.30pm, closed Friday lunchtime. I gather that it is perfectly acceptable to wander in just to look at the art as long as they aren't very busy.
Posted by Amanda Bates at 22:58 No comments:

I've had a few communication issues over the past week or so. For reasons that are not very interesting, I was simultaneously without reliable Internet access (although I did discover that the local public house has excellent free Wi-Fi) and without a car. Thankfully, both are now back, and I can show you a few new paintings...

The panoramic view above is called "Engine Houses and Gorse", and depicts Botallack, West Cornwall. They may not be mining tin (or copper) there anymore, but I am still mining the wealth of photographs that I took in Easter 2012.

Posted by Amanda Bates at 22:44 No comments: