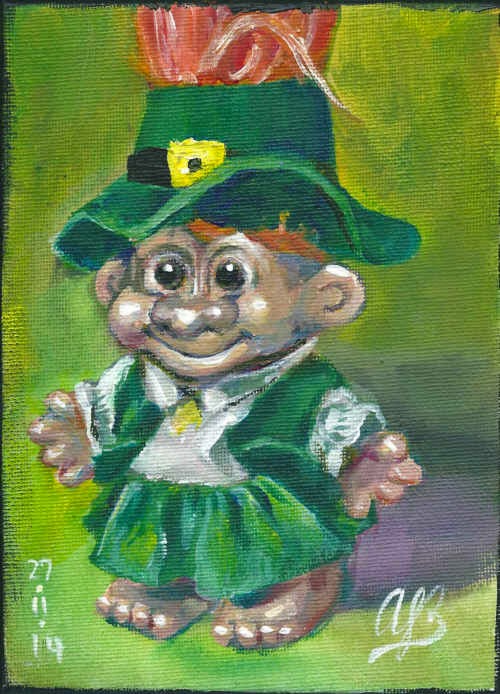 I borrowed a few of these "Troll dolls" (AKA "Dam dolls," after their creator) from a neighbour for the next part of the Cover 2 Cover Sketchbook project. Two of the dolls made it into the sketchbook; this one is a small surprise gift for my neighbour.

Postscript: You'll find the Sketchbook trolls on Flickr. They'll get blogged when the final spread is done...

Posted by Amanda Bates at 09:50 No comments: 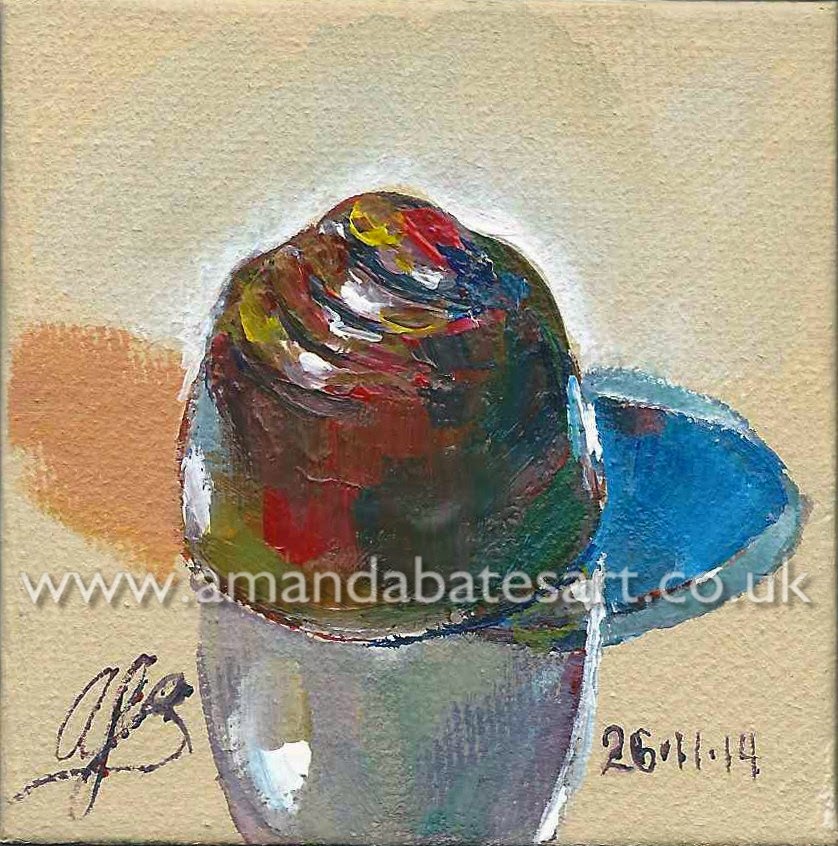 Dear reader, I ate it.

Somebody had to, after all.

The final pages of my bit of "In the Clouds". And a drawing on the cover...

Continuing the trawl through my part of my collaborative sketchbook, themed "In the Clouds". The music links are a little less direct this time, but I thought it would be fun to think of a popular song or two to go with each picture.

These sketches weren't done in the order that they appear; I had several ideas right from the start and I wanted them to appear in certain combinations. I also wanted to vary the interpretation of the theme and the media used, and to try and challenge myself a little. As a result, I managed to learn one or two things. 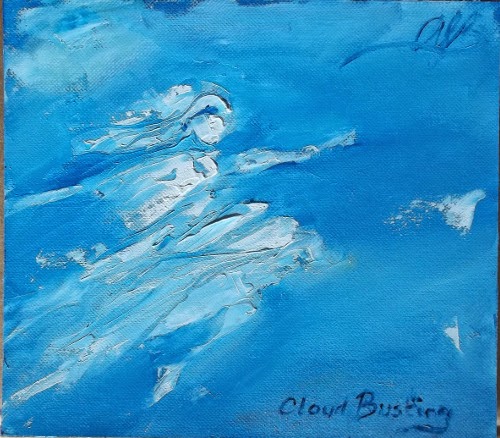 This is an imaginative piece, with a cloud-dancer and a couple of Kate Bush songs (Cloudbusting and The Big Sky) in mind.
It isn't painted on the page of the sketchbook, but on a small piece of oil-painting paper. I started with the idea of using "lean" paint (thinned with turpentine) but ended up with fatter-than-fat neat titanium white, trowelled on with a knife. Needless to say, it's still too wet to stick in the book. Fortunately, I get the book back at the end.

Something learnt: No more palette-knife oils in the sketchbooks!

"Nuthanger Down in the Mist", Graphitint. 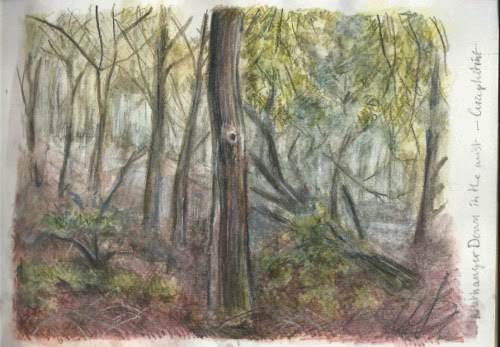 A Down-to-earth cloud, with trees in it... Based on a photograph, this subject seemed a good match for the subtle colours of Graphitint.

Something learnt: White Graphitint has its uses. 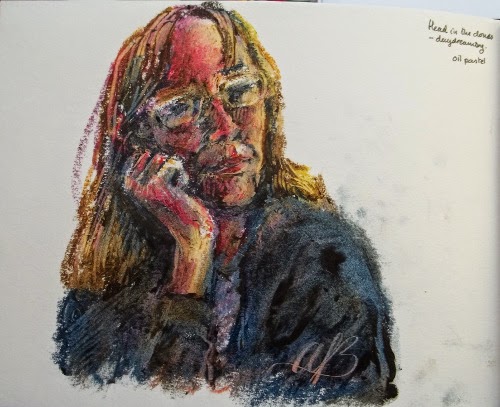 A metaphorical interpretation. Oil pastel is great fun to use, allowing broad strokes and fine scratching-back (it can also be dissolved in turpentine, but I didn't do that here). It's not best-suited for small drawings; I think I was pushing the limit here. It also never dries, and remains malleable for - as far as I can tell - ever. Oops.
As I had a drawing opposing it in the sketchbook, I needed to do something about that. I cut a piece of greaseproof paper roughly to size and sellotaped it in as a protective leaf. This worked until I foolishly went and stood in a field on a windy day to make the last sketch, at which point the sketchbook flapped around, the greaseproof paper rolled and folded and ... no damage was actually done. But it could have been, and the sketchbook is only at the beginning of its journey, so I investigated online and discovered that Sennelier make a fixative for oil pastel based on a resin spray. It arrived yesterday and seems to do the job very well.

Something learnt: Greaseproof paper is a clumsy solution to the problem of oil pastel in crowded sketchbooks. 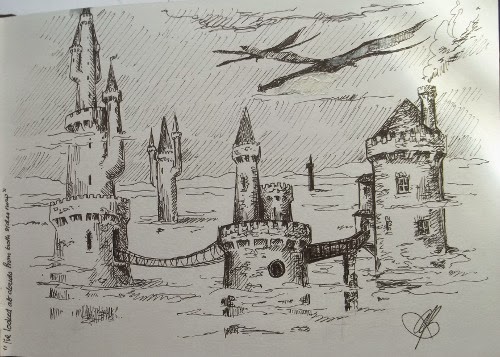 A daydream, a fantasy, and a line from the Joni Mitchell song Both Sides Now, which also happens to be (in part) about clouds. A friend told me it reminded her of Gormenghast, and she is right, although it was unconscious on my part. (I really must read the whole trilogy.)

More castles in the next instalment...

Posted by Amanda Bates at 21:13 No comments: 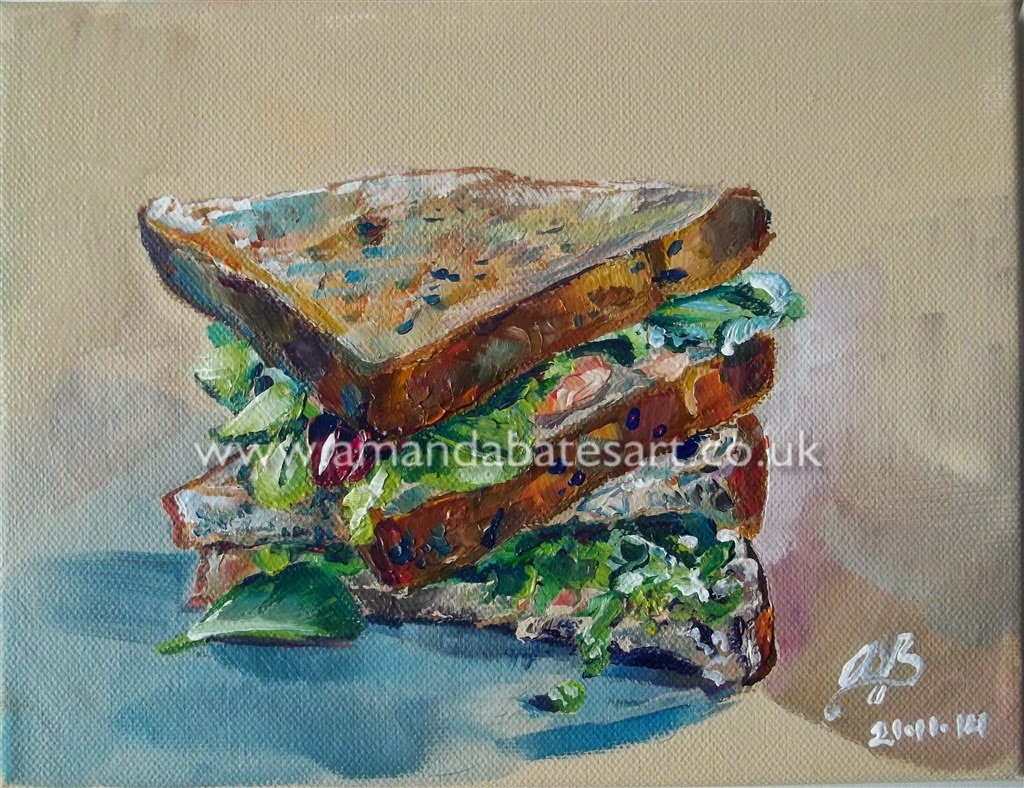 Tuna with mayonaisse and lettuce on seeded wholemeal. 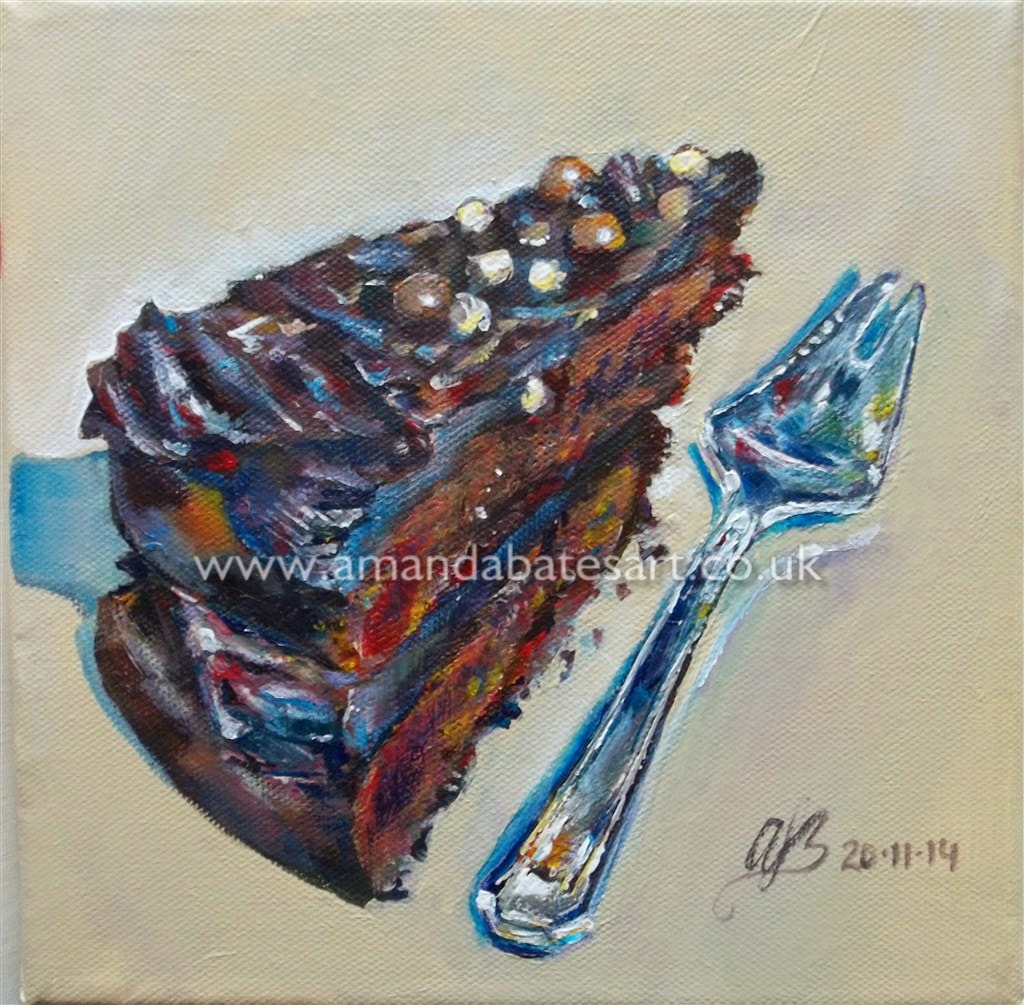 It was surprisingly difficult getting the right level of not-brown in this one.

It is a homemade cake. I put so much cocoa powder in the butter icing that you can barely taste the sugar.

Next May, I will be opening my studio for the first time as part of the West Berkshire and North Hampshire Open Studios scheme. It is all rather exciting and new.


What is Open Studios?

Open Studios is a concept that involves artists inviting the public into their work spaces. This is usually as part of a scheme involving several artists in a geographical area who all open during the same period and whose details are collected together in a freely distribuuted guide. Interested people can then tour the studios, and may even buy some art direct from the artists they are visiting!


There are a couple of "extras" running alongside the core Open Studios scheme here in West Berkshire and North Hampshire; there is the Insight exhibition, to be held at New Greenham Arts, and there is the collaborative sketchbook project - which is the subject of this post.

Artists who choose to be involved get an A5 landscape sketchbook, for which they choose a theme. They then fill a number of pages (up to five double page spreads) with things related to the theme.

Then they pass the book on to the next artist, exchanging it for another, with a different theme. Again, they then fill up to five double page spreads with things related to this theme.

My theme is "In the Clouds".

It's a song title, but ignore that and there's a lot of scope for interpretation – literal cloud studies, shapes that might be seen in the clouds, things that might be obscured by cloud... fluffy and white, ominous and grey, however the mood (or the weather) takes you.

I have completed my ten pages, and am looking forward to the first exchange. 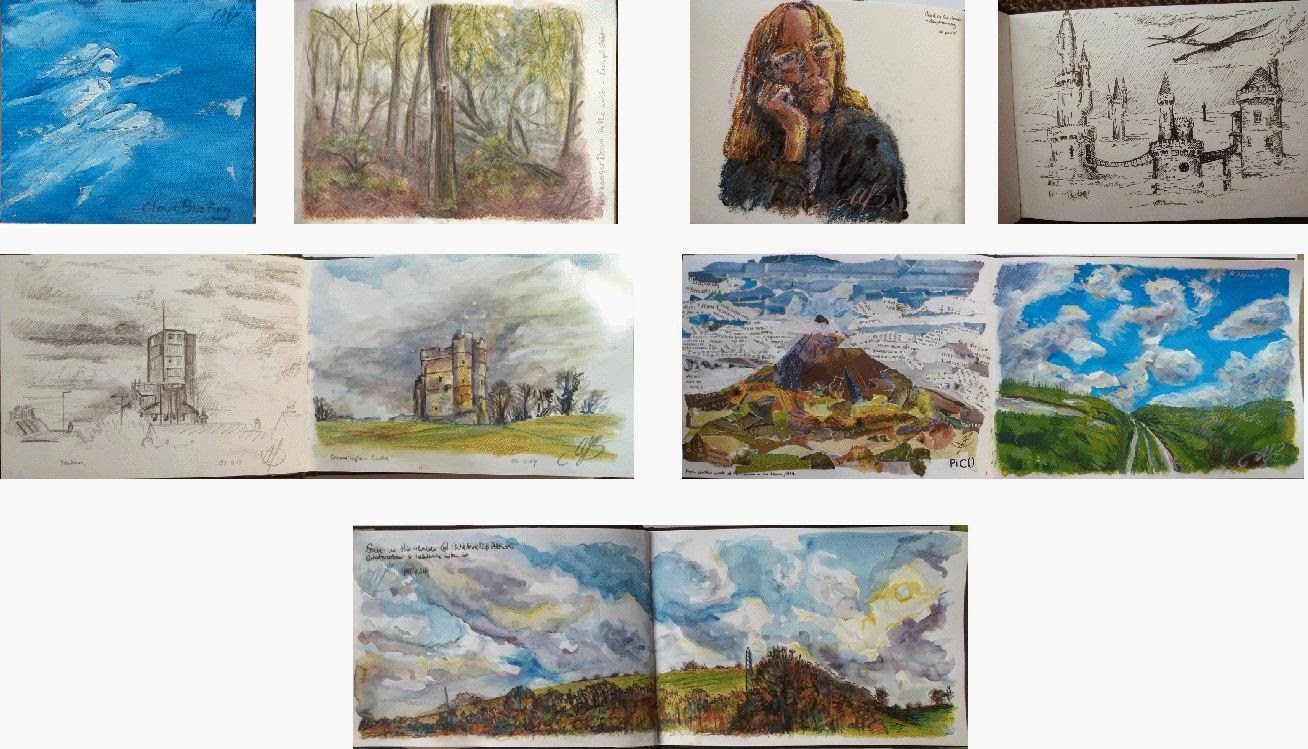 This post is getting a bit long, so I will leave you with the collected images and - hopefully - find some time and some bandwidth* to write about each one later.

----
* We have been without landline or broadband for three weeks; the trunk cable that serves us and many of our neighbours is in need of replacement. BT are digging up the thoroughfares of the village as I type...
Posted by Amanda Bates at 15:26 No comments: 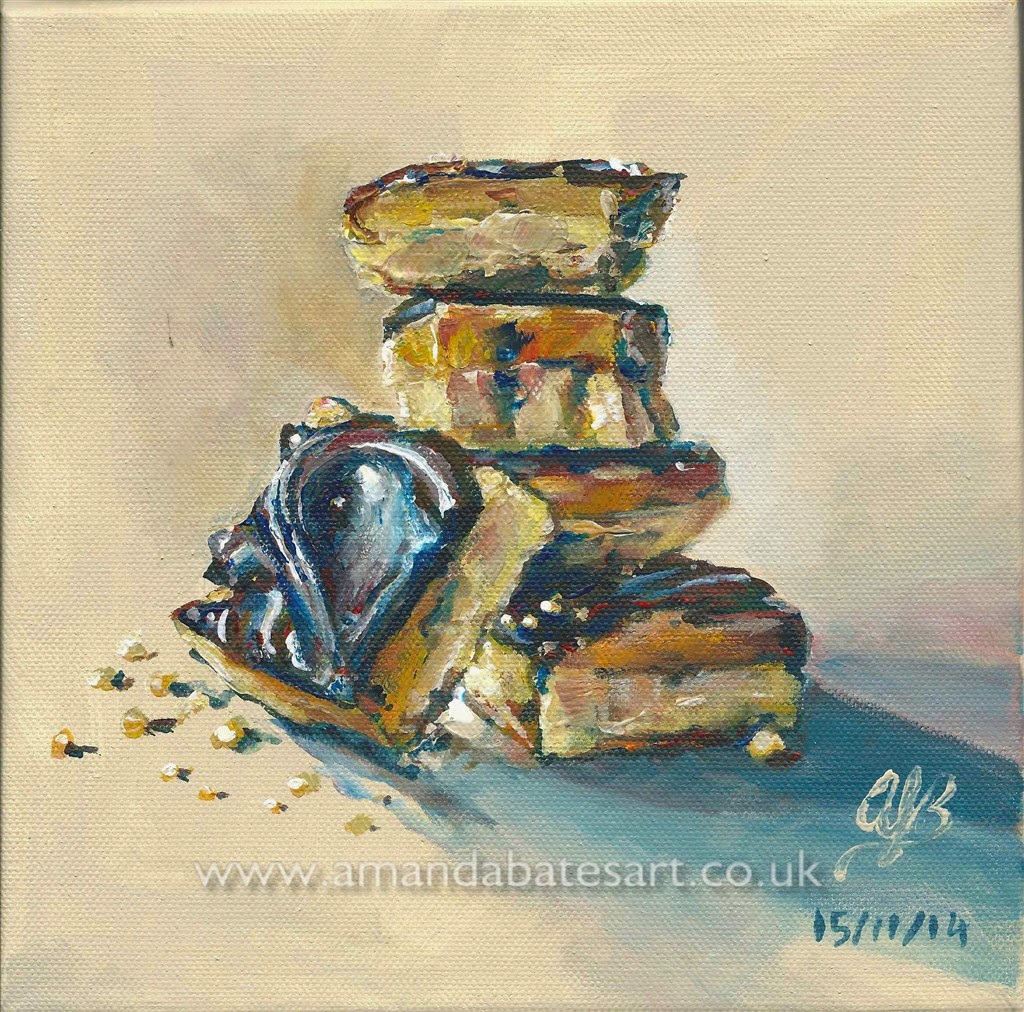 A sight variation on the cakes theme; technically a biscuit, these were homemade (all the others were shop-bought, which I feel a little ashamed about) and the image you see is a scan of the painting, not a photograph.


The title may be something of a misnomer, as there is scarcely any green in the painting (there was more in the source photographs), but the trees on this part of Newtown Common were pretty much all evergreens.

The colours weren't the only thing I changed; I also added a second path, to give you a choice of which way to go... 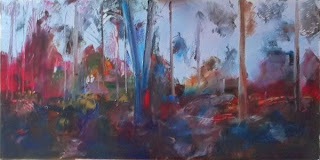 This is one of those moments when I take stock and reconsider using "real" colours. It isn't finished; there is more to do, but how close to reality do I take this now? 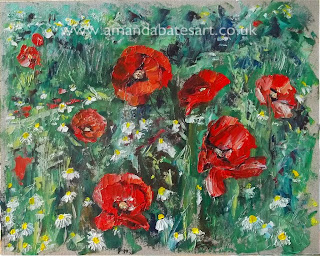 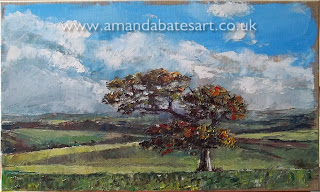 Very quick post on borrowed Internet because our communications, to paraphrase Spandau Ballet, have let us down. 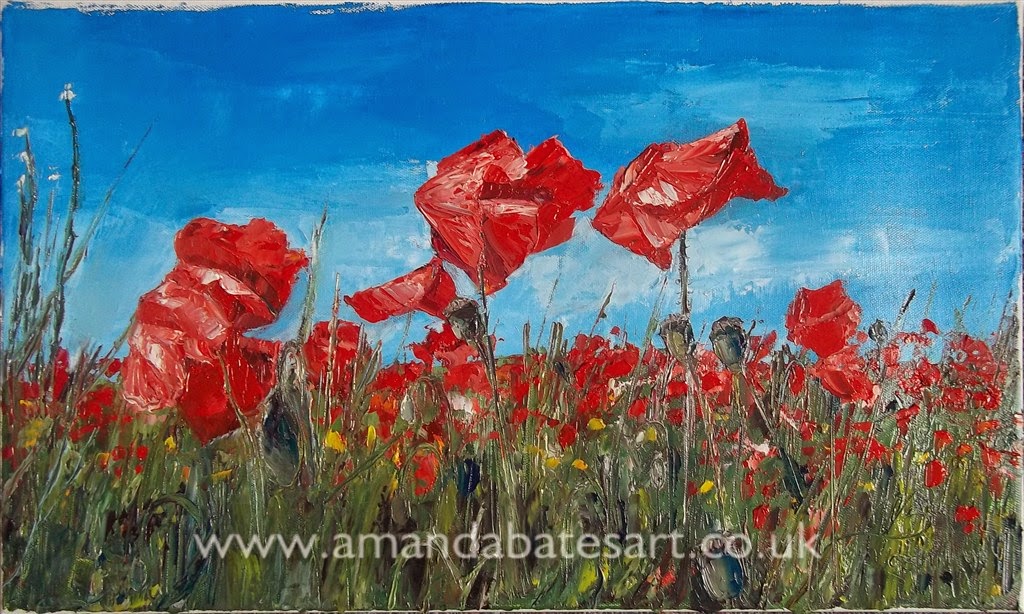 It's a good time of year for painting poppies. 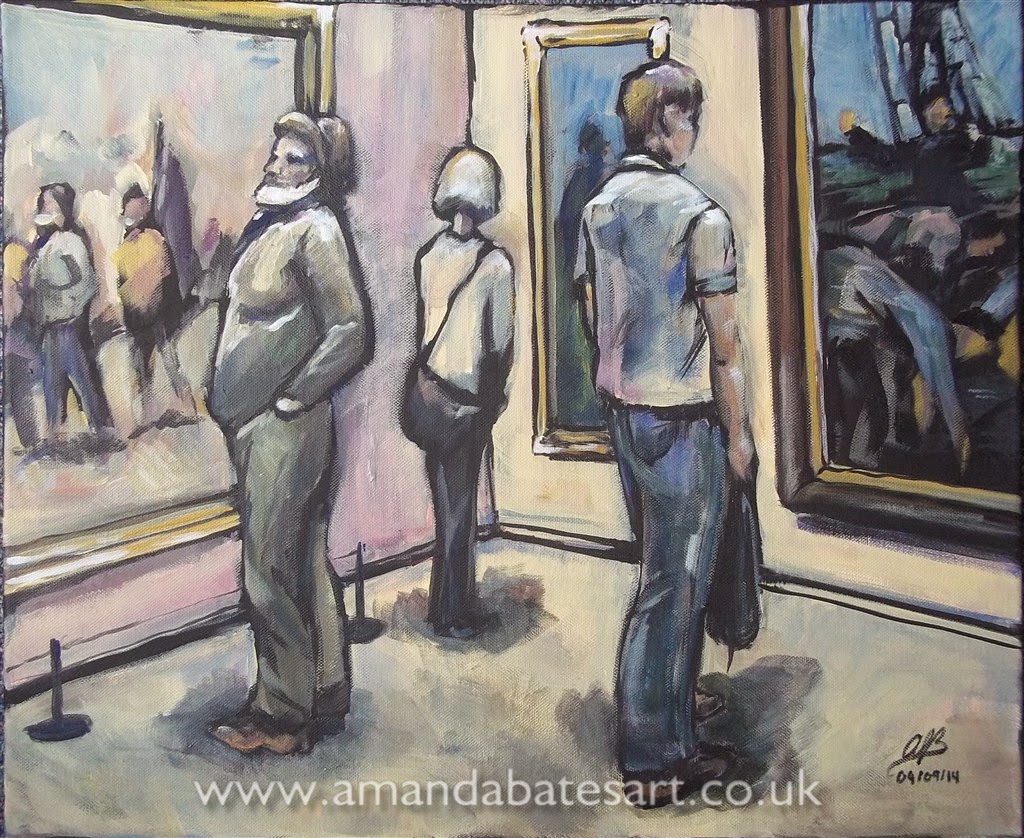 I entered this painting to Penlee House's "Penlee Inspired" Open Exhibition and am delighted to report that they have accepted it!