The final pages of my bit of "In the Clouds". And a drawing on the cover...

"Up to the Ridgeway (Wiltshire)", acrylic. 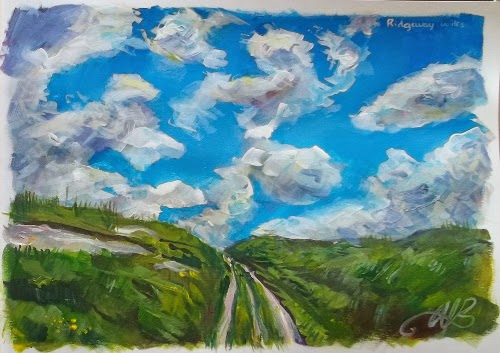 Based on a photograph taken on the climb up to the ridgeway near Hackpen Hill in Wiltshire. I had a comission to paint Hackpen Hill, and this was from the rather glorious day that I went on my plein air expedition to do so.

The clouds that day were stunning. At one stage, the sky was filled with downy feather-shapes - almost unbelievable. I chose this image because of the ascent of the path ahead. I wanted to portray the climb up towards the sky.

Something learnt: Acrylic works surprisingly well in a sketchbook, but doesn't make a very good barrier to water soaking between pages.

"Sun in the Clouds at Watership Down" , watercolour and Inktense with Indian Ink

I wanted to finish with a flourish - a panorama of a scene local to me, made from life, preferably standing in a field rather than sitting in a car... Where better than a famous and rather attractive great long hill? Where better than Watership Down?

I made one compromise - I drove to the foot of the down instead of walking. I parked in a muddy field entrance, crossed the narrow road and slipped into the field on the other side. The clouds went in in watercolour with a big round sable brush, then I used Inktense pencils to give the hill some contrast to the sky. The big round sable was re-employed to intensify and fix the ink from the pencils.

Finally - after I returned to the car - I decided more definition was required and added some ink lines using a 0.3 Derwent Grafik pen.

It wasn't until after I got home that I realised that my enthusiastic scribbling on the darker trees had gone through the paper to mark the following two-page spread. Which isn't mine to draw upon.

I shall have to make my apologies when I make the exchange later today.

Something learnt: Be very careful with wet paper and pencils! 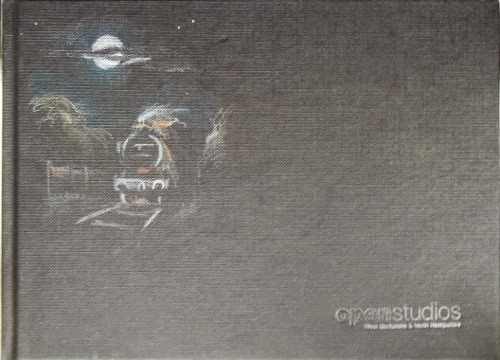 Nobody said anything either way about embellishing the cover, but I had a subject that would work well on the black fabric and so I sketched it in using Derwent Drawing. Clouds across the moon, and a cloud of steam...