Red Wine and Apricots: a series of three oil paintings

These three paintings were made on Saturday, Sunday and Bank Holiday Monday of the long weekend just gone. I had my studio open as part of Open Studios West Berkshire and North Hampshire on all three days, and it seemed like a useful sort of thing to be doing in between visitors.

I was attracted to the glassy reflections and to the subtly varying colours of the bottle and its dark contents. I also enjoyed the contrast with the duller texture of the apricots and the book, which toned so seredipitously with the fruit.

Each painting is 33 x 41 cm and is executed on clear-gessoed natural linen in oil paint with a knife (more accurately, a selection of knives). Together, they tell a sort of story - a very ordinary story, of things being consumed - but they aren't necessarily intended to be a set. Despite that, I can't help but think of them as being the beginning, middle and end...

Just in case you were wondering, the wine was a smooth but unremarkable Bordeaux, the book is Leonardo by Martin Kemp, and the apricots were - well, they were apricots, and they were very nice.
Posted by Amanda Bates at 22:51 No comments:

I've painted this beech tree before, but this time it is in leaf, and more of the lumps and bumps of the hillfort's earthworks are visible.

The tree stands, tall, proud and solitary, by the entrance to the fort (here, we are looking out of the fort). It made me think of a guardian or sentinel.


Earlier this week, I visited Danebury Hill, where there is a large, well preserved, iron-age hill fort. There is also a very lovely beech wood on the side of the hill. Here, the beech trees are growing over the outer ramparts of the fort, their shallow root systems rising from the ground as the trees cling to the earthworks.

The painting is based on photographs that I took at Danebury.

Posted by Amanda Bates at 21:07 No comments:

Last Friday, I revisited Wolverton Woods to catch the end of the bluebells. I was attracted by the fantastic contortions of the large beech tree that became the focus of this painting.

Posted by Amanda Bates at 09:49 No comments: 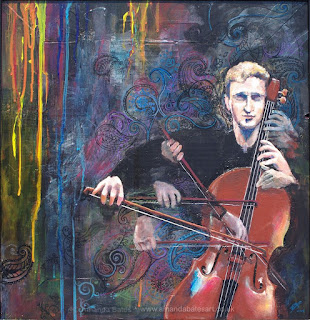