This is my version of the calendar included in the Open Studios Literature.

And this is the official one... but note that I am only open until 3pm on weekdays because of the school run.

Posted by Amanda Bates at 22:33 No comments: 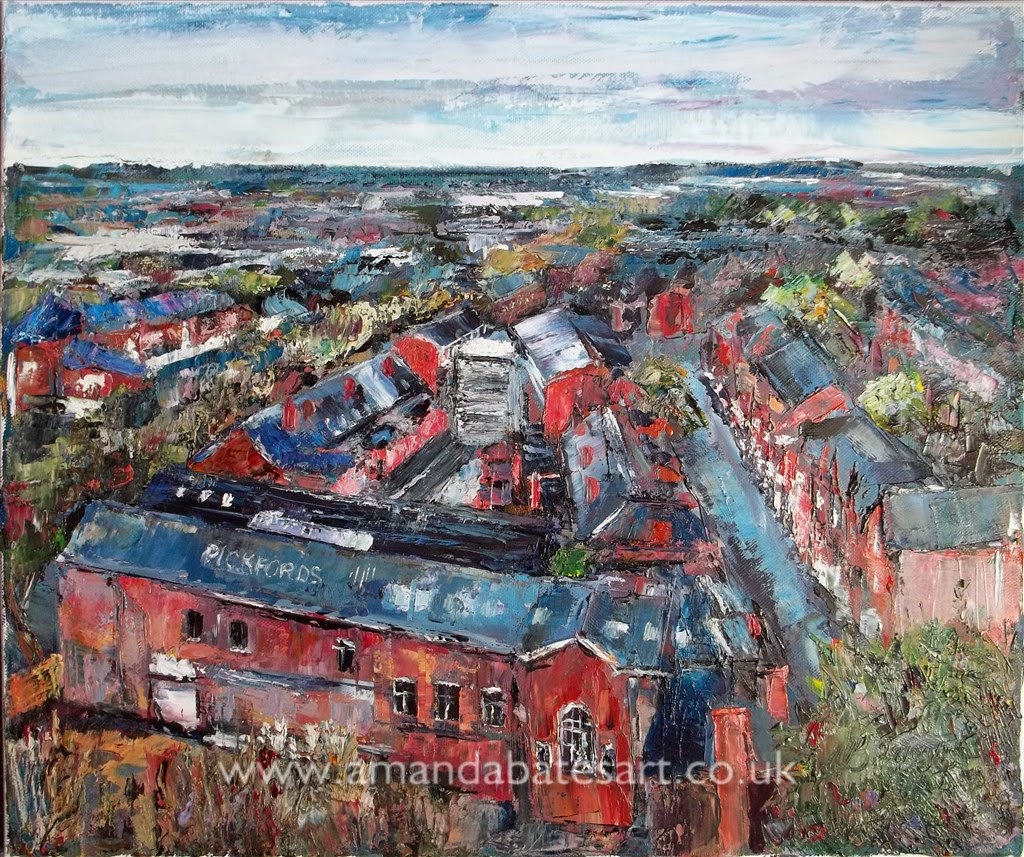 This - worked up from a photograph that I took just over a year ago - has been a long time in the painting. I started it before Easter, and - because it is such a complex subject - didn't manage to finish it before the school holidays started. I rarely get the chance to paint in the studio during the school holidays. As soon as the children went back to school, I was busy preparing for the Reading Contemporary Art Fair.

The paint was surface-dry when I went back to it today. This isn't really a problem, unless there is a lot of texture that I'm trying to paint over (it's a bit like an acylic knife painting in that respect), and I had been aware that a long interval was a strong possibility, so I had deliberately minimised the impasto.

As it happened, a dry surface was quite useful. I discovered that a colour shaper (effectively a solid silicon paintbrush) would lay down paint very effectively onto a reasonably smooth layer of dry oil; this is how I managed to write the word, "Pickfords" on the roof of the foremost building.

This building and its roof inscription give the painting its name. As far as I can make out, Pickfords no longer occupy this building, which is in Nottingham (the elevated view is from Nottingham Castle). In fact, it appears - from Google's Street View images (dating from September 2014) - to be under development. 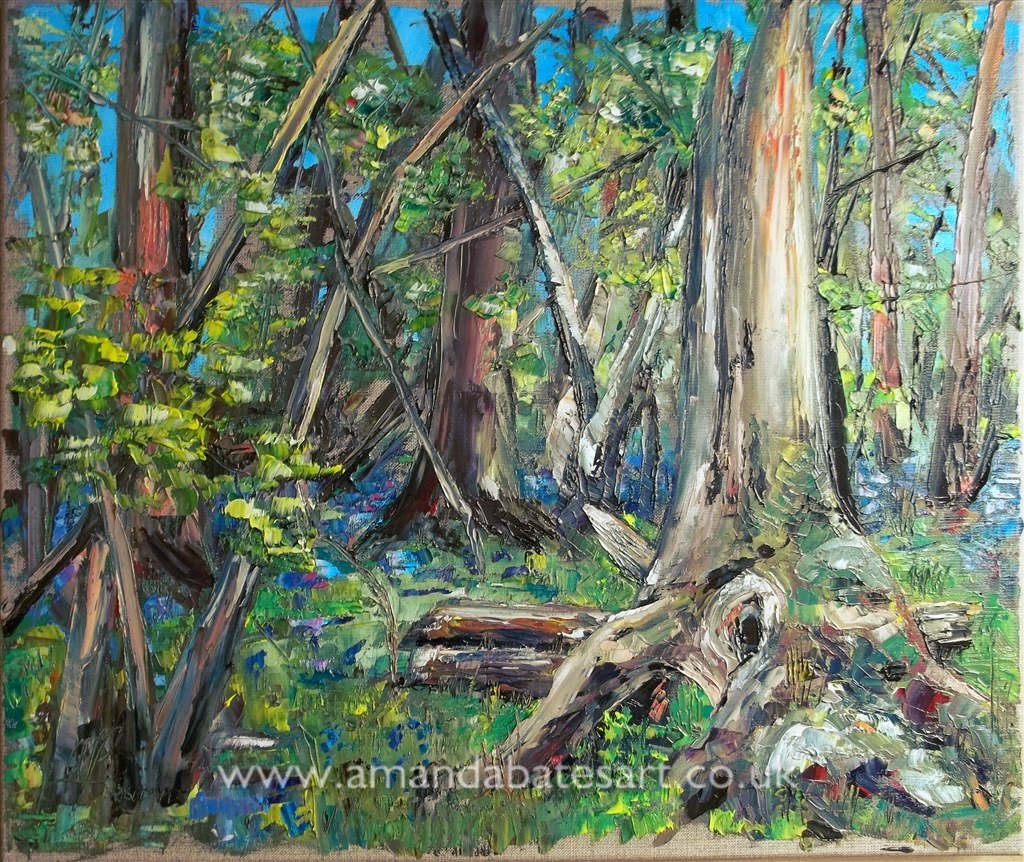 This is a plein air painting from yesterday that I did a little extra work on this morning, mainly to restate the contrasts between the darks and the lights.

Unusually, I had company on this painting expedition. My friend, Rose, joined me for both the walk and the paint. She worked in acrylics while I stuck to my favoured plein air medium of oils. We were specifically looking for a good display of bluebells and ended up back at the first wood that we passed through, having walked three or four miles to look at an alternative.

It's a good job that we both enjoy walking!

The tall , hollow, tree stump was the focus of both of our paintings. In fact, the bluebells were almost incidental.

Last weekend was the Reading Contemporary Art Fair. It was the first time that I have had a stand at such an event.While it was an interesting and enjoyable experience (if a bit nerve-wracking), I was rather disappointed by the fact that I didn't sell enough to cover the cost of the stand.

Having spoken to some of the other artists and given it some serious thought, I have just come up with a number of potential reasons for this - reasons that don't preclude me trying again.

My inexperience and newness probably contributed quite a lot.
The organisers (who were efficient, helpful and otherwise generally very good at what they do) reported a 20% increase on sales on 2014. However, I do know that I was not the only artist who was struggling. On Saturday, the consensus appeared to be that sales were low. I presume that they picked up on Sunday, but not for everybody.

Sales aside, however, I am hoping that the fair will have got a few potential customers interested, perhaps to visit during West Berkshire and North Hampshire Open Studios in May, perhaps to contact me in some other way. I had to replenish my pile of business cards during the fair, and we gave away all but one of the Open Studio directories we had...

It was also a nice opportunity for networking. I don't think I'm going to get galleries knocking on my door just yet, but it was good to speak to other artists, both local and not-so-local, established and almost-as-new-to-this-as-me.

Down the Line: the West Pier 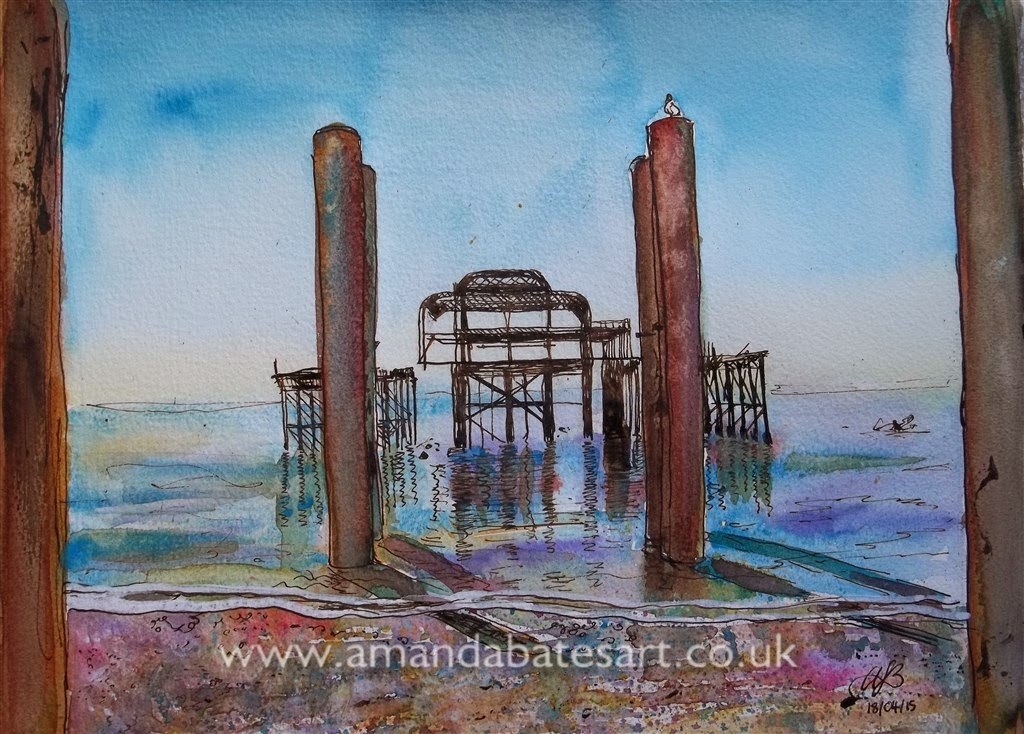 Brighton's West Pier is in a sorry state. There was a lot more of it there (although it was not accessible) in 1989, when I moved to Hove (and then Brighton), but it has been falling into the sea, hit by storms and arson, and I understand that there is nothing that can reasonably be done to save it.

Nonetheless, the skeletal remains are elegant and distinctive. Apparently it is the "most photographed building in Brighton". I took many photographs of it, myself, when I revisited Brighton and Hove on Wednesday with my children. This line and wash is from one of those photographs.

Line and Wash on The Langton watercolour paper, cropped from A3 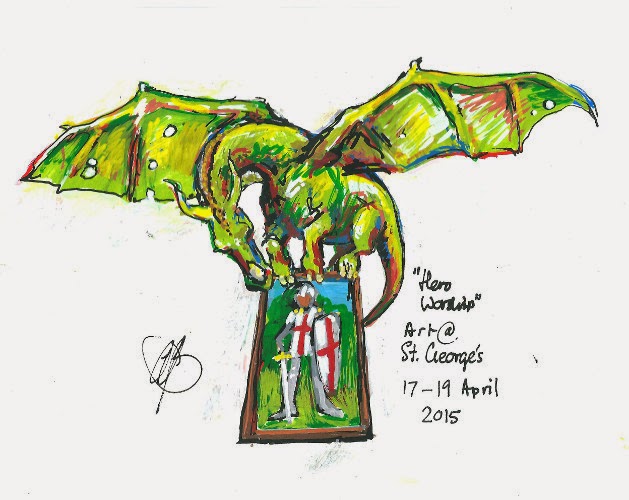 Posted by Amanda Bates at 12:41 No comments: 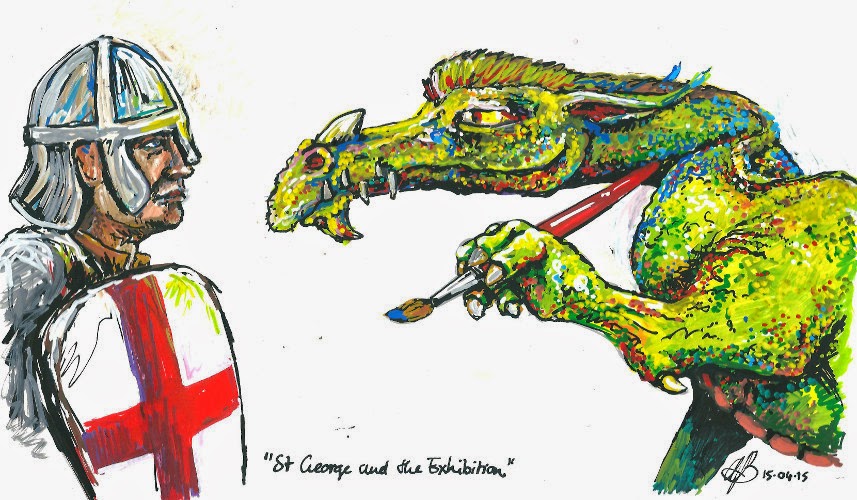 With my car out of action, I begged some favours to get my trees to Newbury yesterday.

The exhibition is on at the hall at St. Georges in Wash Common, Newbury this weekend:
£1 admission.

Should you venture into the show, you may see one or more of those trees of mine: 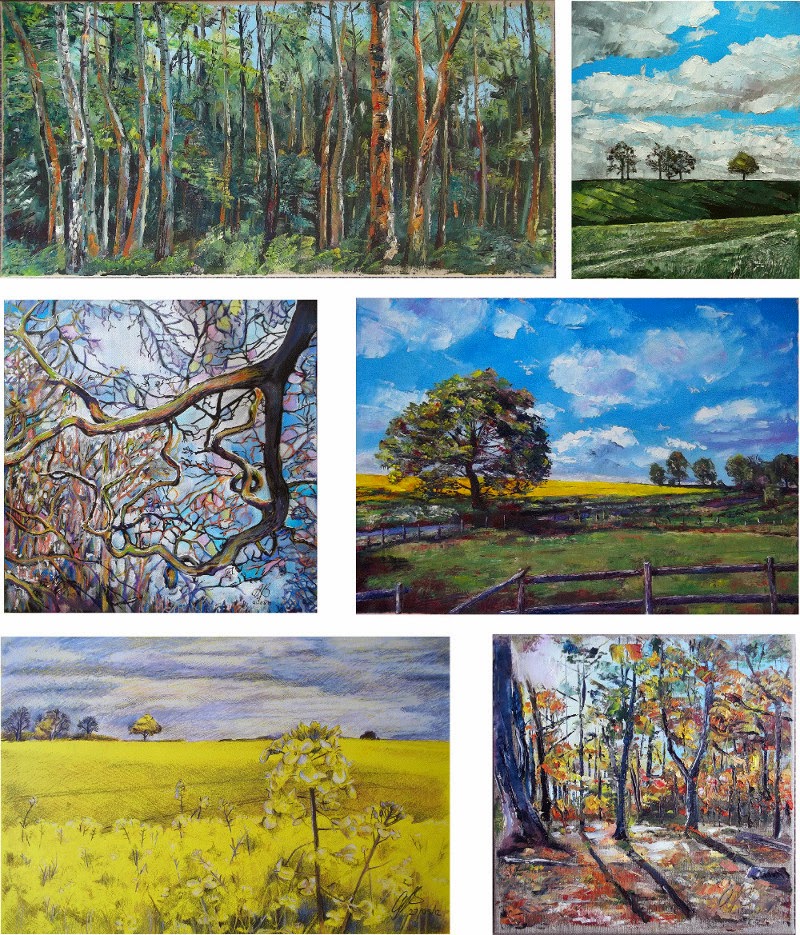 Posted by Amanda Bates at 09:30 No comments:

Yesterday, I went to Brighton with my children. But I parked in Hove (actually), as part of a plan that was largely scuppered by a derailment outside Brighton station.

This is the view from the top of the multistorey car park in Hove.
Posted by Amanda Bates at 13:03 No comments:

My car broke down on the A272 yesterday. It developed a coolant leak...

St. George and the Exhibition 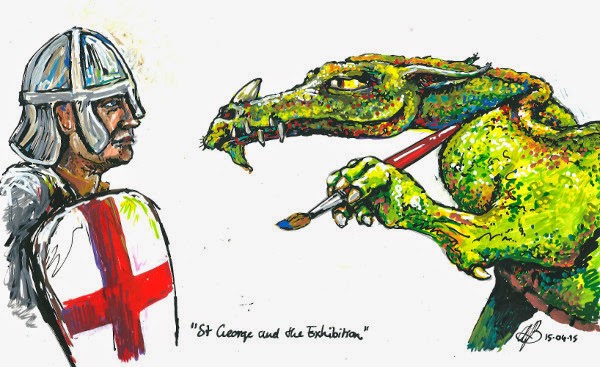 I was going to write a straightforward I'm-really-looking-forward-to-exhibiting-at-St.-George's piece.

But then the title of the post occurred to me.

And then the drawing had to happen.

But I am really looking forward to exhibiting at St. George's (in Wash Common, Newbury; the exhibition is this weeend, 17th to 19th April 2015). I'm taking them pictures of trees. No dragons. I hope they don't mind.
Posted by Amanda Bates at 23:14 No comments: 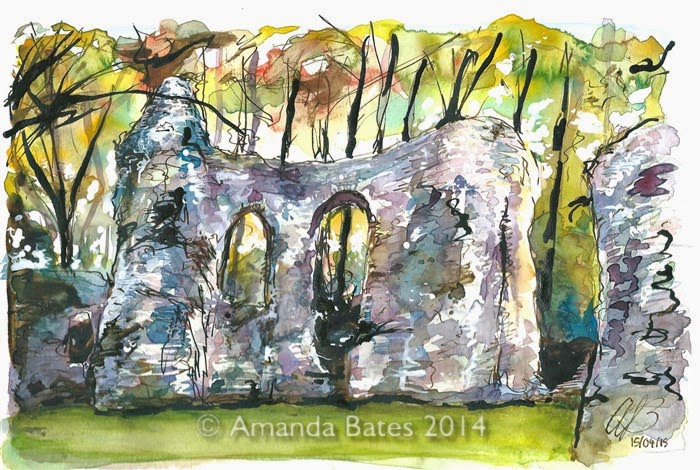 Reading Abbey has been closed to the public for several years now; I understand that there is a risk of faling masonry. It seemed pretty solid the last time I was there... at the time, I was playing with my new SLR (a second hand Pentax K1000) and took a series of black and white photographs in which, to be frank, the masonry and the autumn eaves were pretty much indistinguishable. So the photographs scarcely represent a solid ruin! Fortunately, I had another camera loaded with colour film, and those photographs helped me to interpret the monochrome ones.

This is line and wash, with sepia acrylic ink (and a cheeky splodge or two of white acrylic ink) applied with pen and dropper, on A4 HP Bockingford paper.
Posted by Amanda Bates at 18:11 No comments:

Baht 'At (On Ilkley Moor) 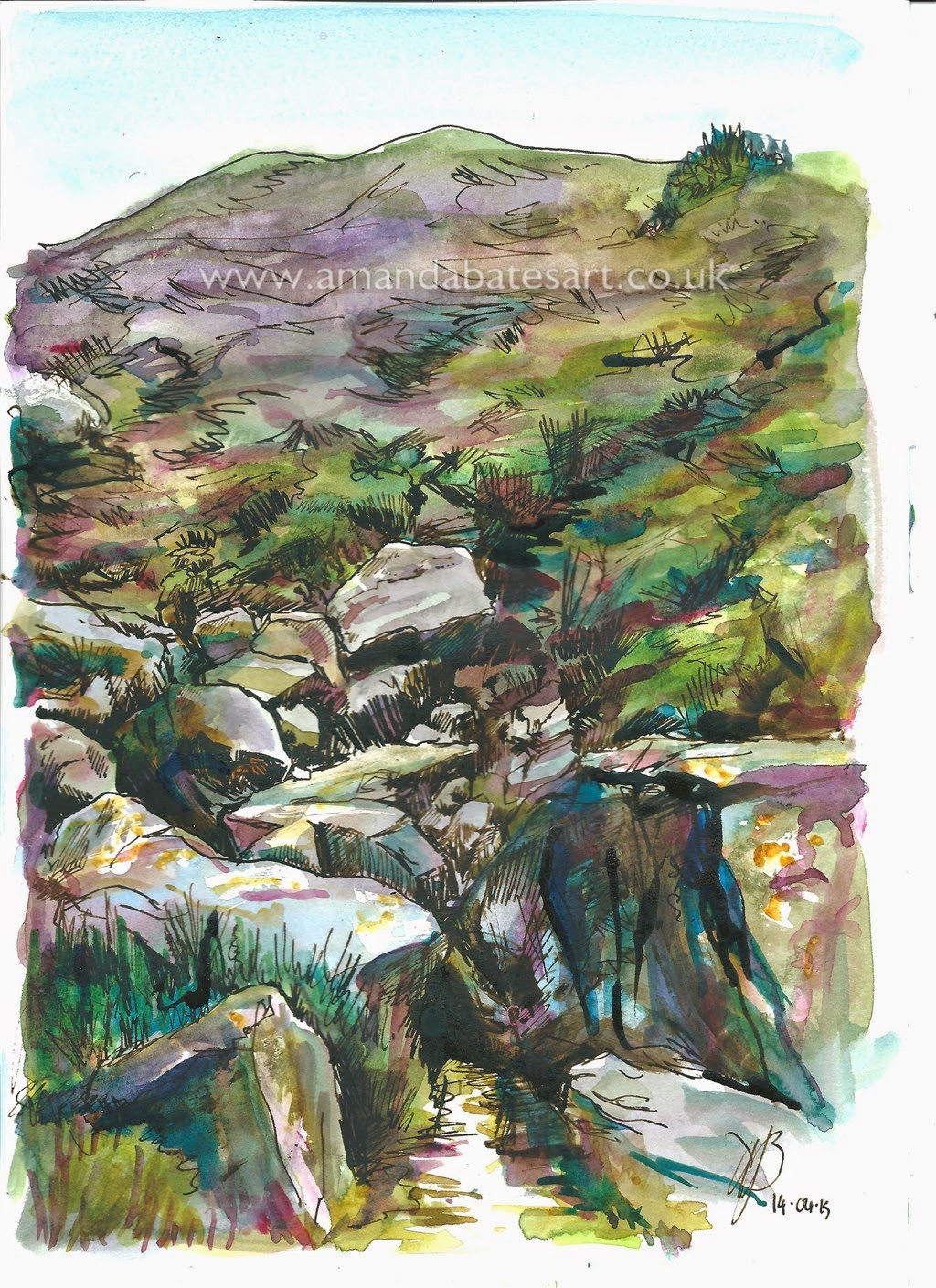 This place has stayed with me since I was last there, and since I took the monochrome photgraph that my line and wash painting is based on. It was about 15 years ago.

I wasn't, to the best of my recollection, wearing a hat.

Posted by Amanda Bates at 07:21 No comments:

For every artist that's new to the scheme
Has taken art right into the town
Because today's the day the
Parkway becomes the art scene!

That's enough of that. All the new Open Studios artists have been invited to exhibit work in an empty retail unit in Newbury town centre (near Costa Coffee, in the new(ish) Parkway development). 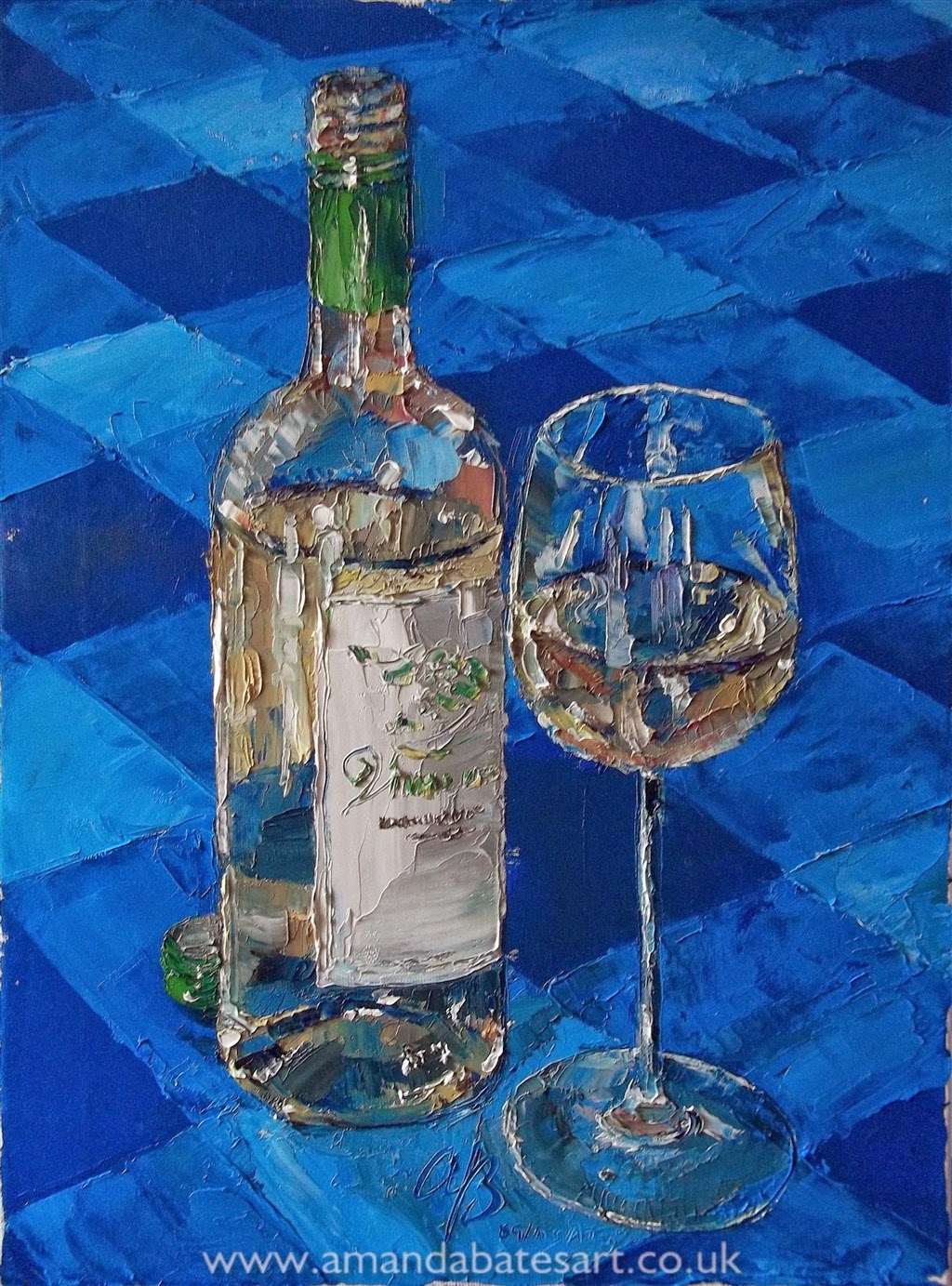 Posted by Amanda Bates at 22:40 No comments:

Our village library has closed. 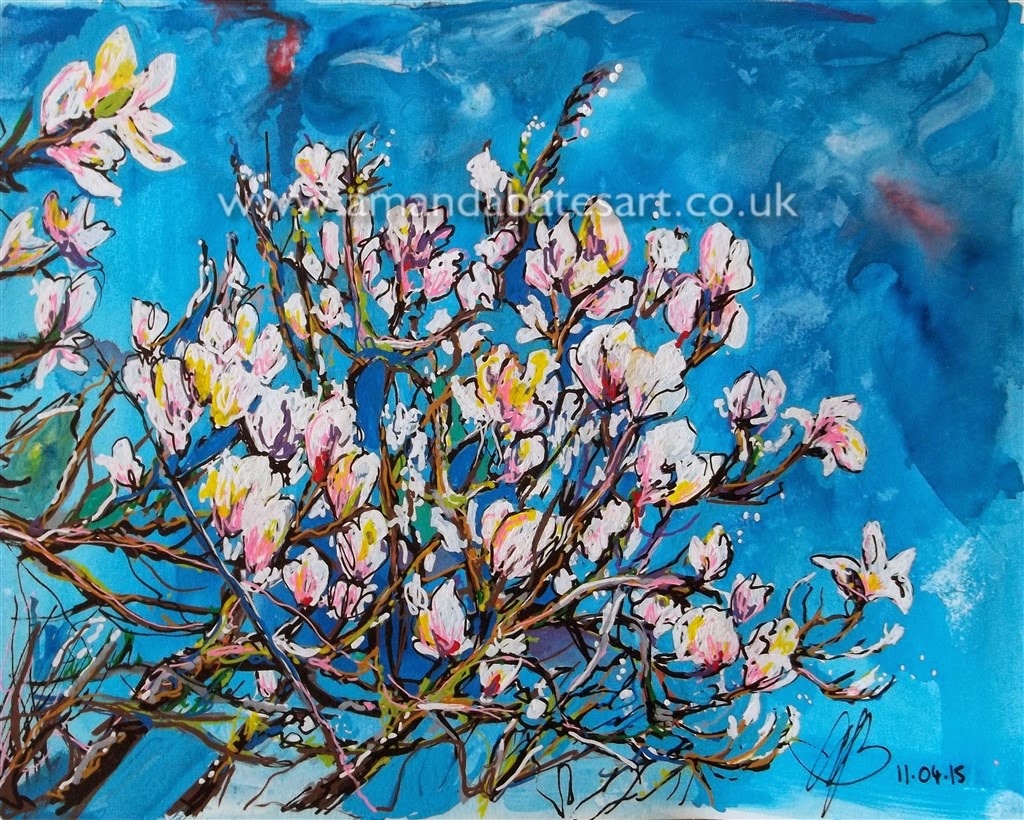 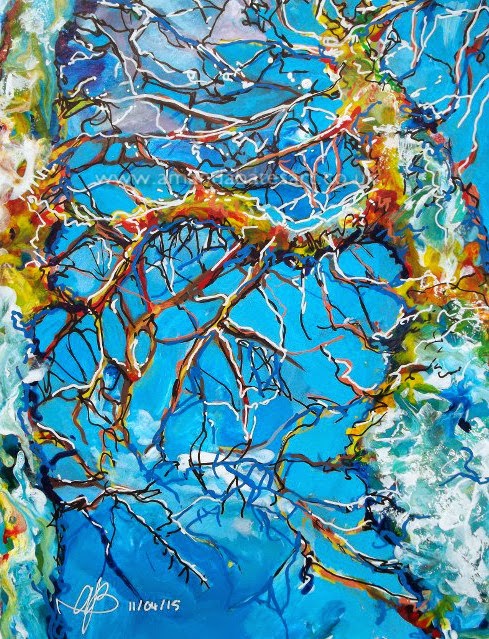 Looking up through the trees, with colours inspired by a shortage of "K" (black) in the inkjet printer.

Posted by Amanda Bates at 14:27 No comments: