It's that time of year when family commitments mean that I don't get into the studio - or out in the field - much, and so it's been a little frustrating having a part-finished large work lurking in the studio.

Rapunzel is, of course, the well-know Brothers Grimm fairy tale. And it was a bit grim for the prince - when his night-visiting antics had been discovered by the witch, he got thrown down the tower into the thorns, which must have broken his fall because his only injury (a cruel one) seems to have been the loss of his eyesight.

This wasn't the end of the tale; he later recognises his love by the sound of her voice - she and her baby were turned out of the tower to roam the forest - and the little family lived happily ever after in the prince's court.

This image is not finished yet, and with the Artikinesis exhibition at Blake's Lock coming up less than a fortnight after the schools go back, it may be October before I raise a paintbrush at the prince and the tower again.
Posted by Amanda Bates at 08:41 No comments: 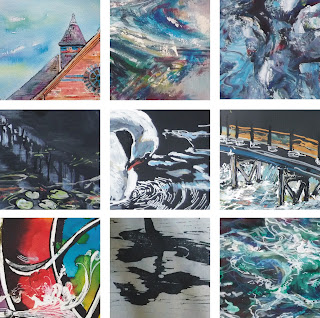 These are details from nine pieces that I have been working on for Artikinesis' Blake's Lock exhibition (17 September to 2 October). I've been considering the surface of the water and thinking about the Victorian turbines...

Posted by Amanda Bates at 16:44 No comments: