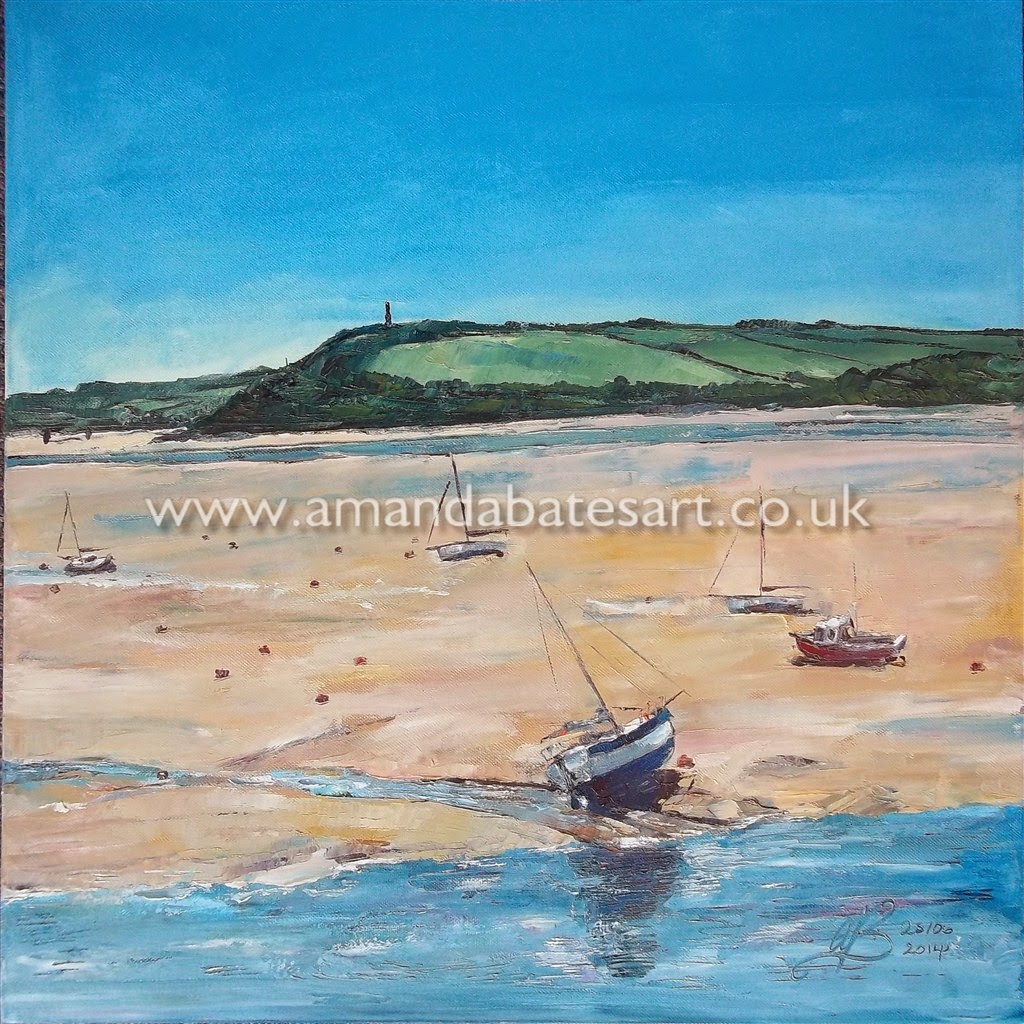 Rock is a village in North Cornwall, just across the Camel estuary from Padstow.  I was asked to paint a view across the estuary, so we detoured that way at Easter and were fortunate enough to find Rock basking in wonderful sunshine.

Winsor Violet on the Kennet and Avon

I have a metal watercolour sketcher's box, made by Winsor and Newton. It's an earlier version of this one. I've had it around 30 years, but I've never actually replaced one of the half-pans until today (watercolour pans last a long while, especially if you don't use watercolour very much).

I bought a number of replacement half-pans more than a decade ago. I had evidently mislaid the card that listed the colours, because there was a whole lot of guessing going on. Some of the "replacements" don't seem to tie in with the originals, and there is at least one duplication. 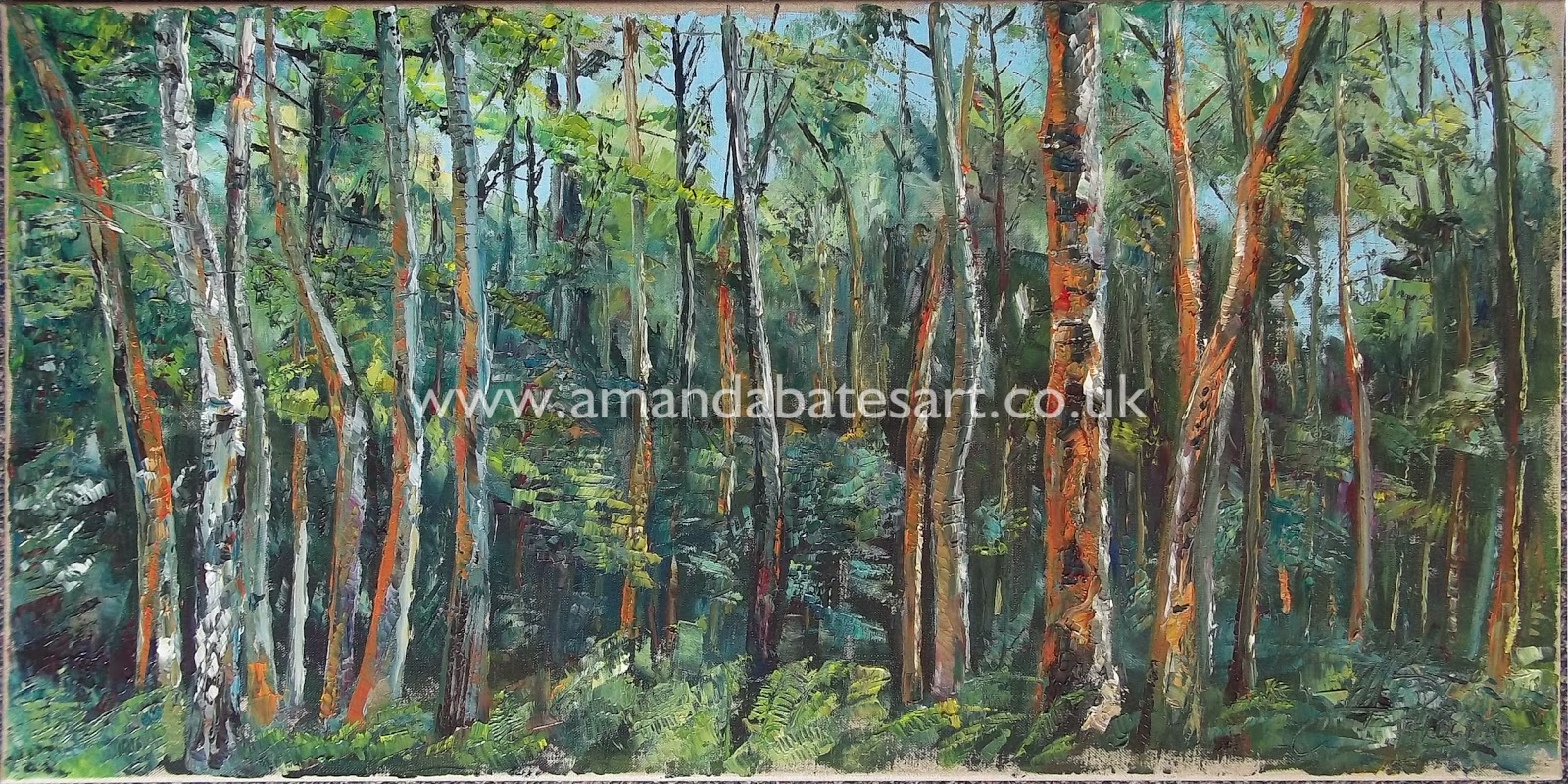 Snelsmore Common is a little oasis of nature between Newbury and the M4. It has fascinating wildlife and geology - and its silver birch seem to have turned orange. I wondered if it was some sort of lichen, but it's too fine for that. Tristam Belstaff, from Reading (around 20 miles from Snelsmore) suggests on his blog that it is an alga called Trentepohlia sp. I'm happy to go with that, even if he was talking about a tree in Reading. 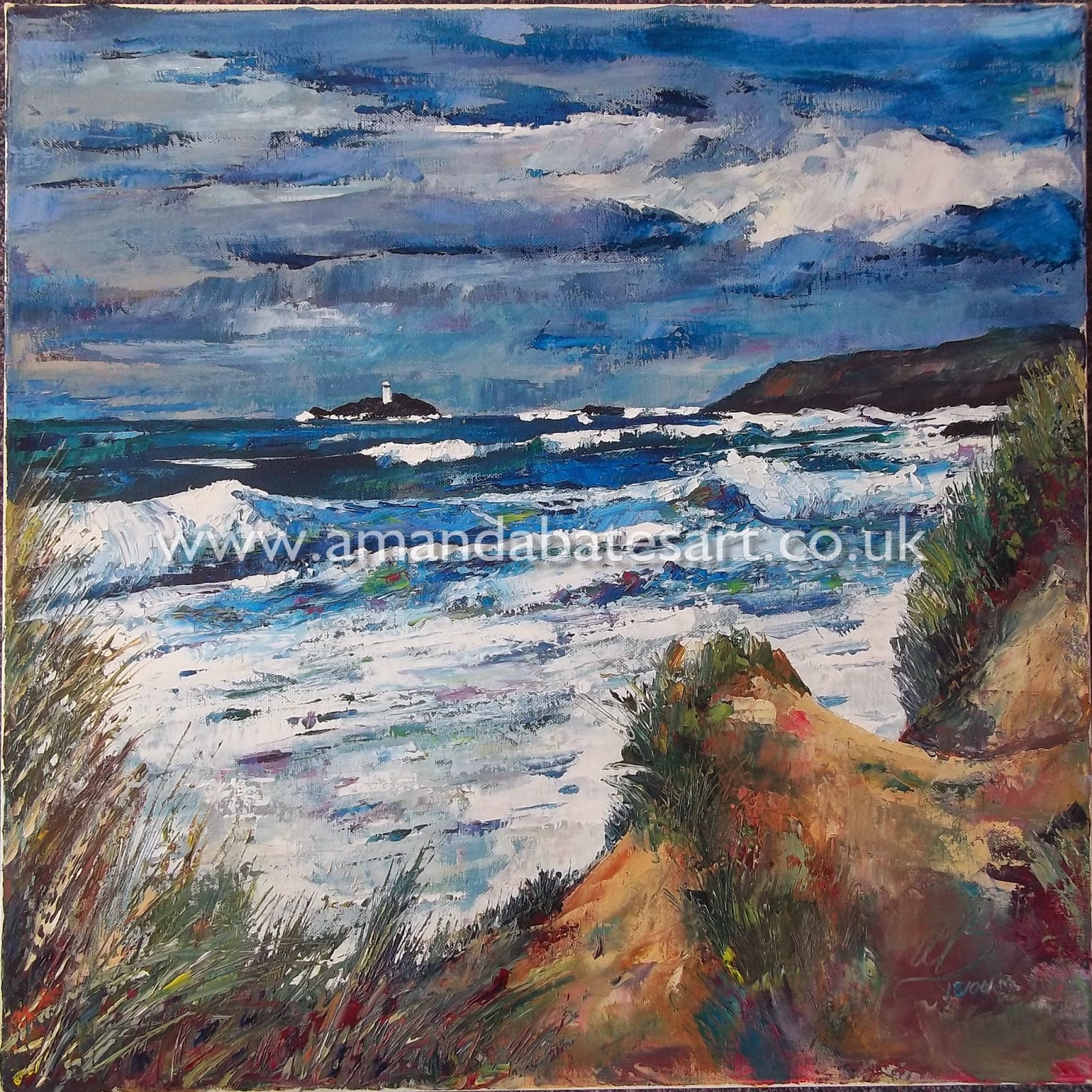 Based on a grey December photograph, this is my rather more colourful interpretaion of Godrevy Light seen from the path over the dunes at Gwithian. 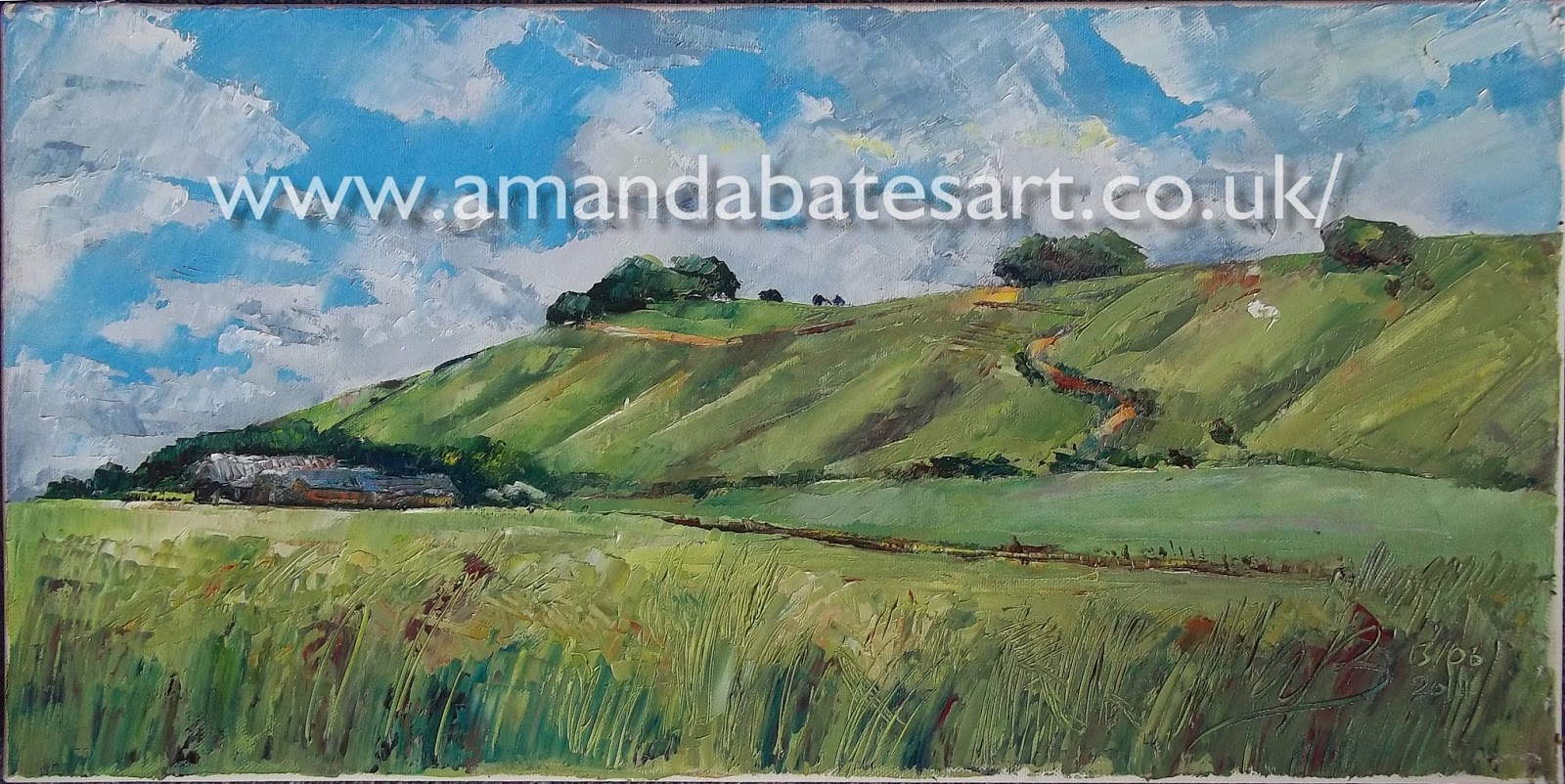 Today, I went back to Hackpen, parked in the car park near the horse, walked along The Ridgeway a bit and then down to the spot I'd identified on Wednesday (slightly further along the path than the place I made Wednesday's sketch at, so that the Field Barn - as described on the ever-useful Ordnance Survey map - fitted in front of the hill, not to the side. I sat in the field margin and painted the hill. 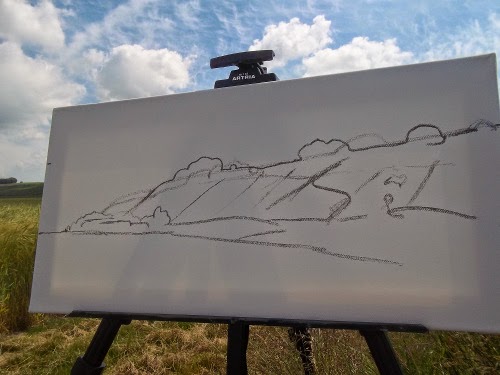 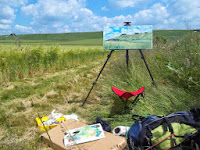 There was a fellow with a remote control aircraft, or something, just down the path. I didn't see what was making the buzzing mechanical drone, so I'm not sure. It wasn't annoying, though, and when he came to say hello, we had a delightful conversation.

He told me that the three clumps of trees on the hill (the leftmost is partially hidden behind the central one in my picture; I don't think that the clump above the white horse counts) were planted for the purpose of rearing and shooting game.

Coincidentally, I surprised a pheasant on my walk back up to the Ridgeway. It - with its sudden explosion of movement and loud whirring wing strokes - rather surprised me, too.

Godrevy Dunes: a work in progress

This is the work currently on my easel. It's not finished, but it is oil on on canvas, 60 x 60 cm, and it will probably be called "Godrevy Dunes". 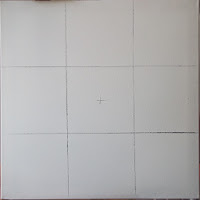 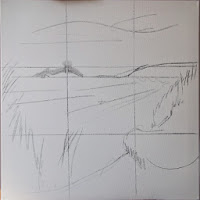 Charcoal marking out the "rule of thirds" to aid composition; compositional sketch, also in charcoal.


To be honest, I rarely mark out thirds, and I only sometimes sketch first. But this seemed like a difficult compostion to fit in the square. 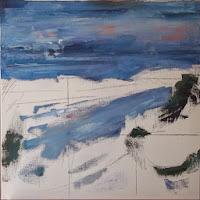 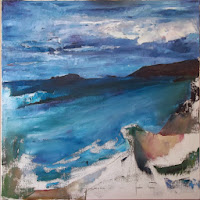 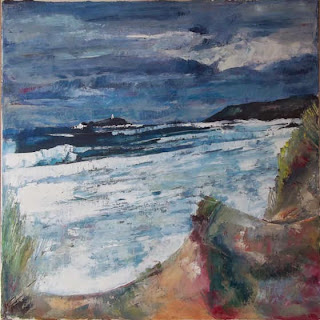 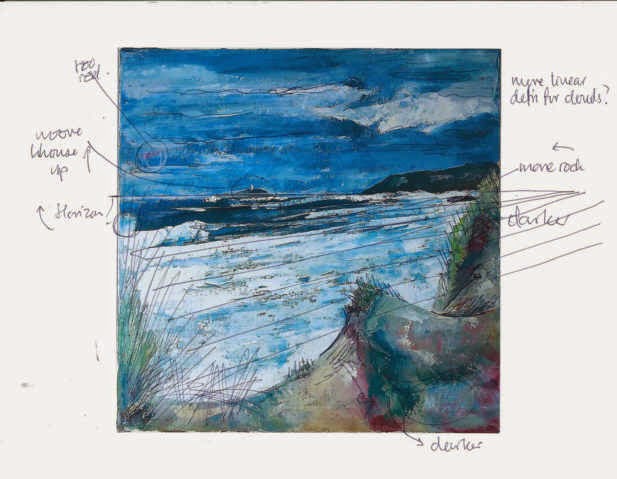 I have actually fixed the horizon now, but there were no batteries in my camera, so there is no picture.
Posted by Amanda Bates at 23:11 3 comments:

There are at least two hills in Southern England called "Hackpen". The latter part of the name - pen - is likely to be from the Celtic for hill. I'm not sure what Hack means; I'm resisting the urge to link it to the word for a "horse for ordinary riding".

One Hackpen Hill is in Oxfordshire, near Wantage, and has a Devil's Punchbowl at its foot. It is not far from the Uffington White Horse (a hill figure, possibly the best known and almost certainly the oldest white horse carved into a British hillside).

The other is in Wiltshire, near Marlborough, and is not very far from a dolmen called the Devil's Den. It has a white horse all of its own (quite a few Wiltshire hills do). This white horse (known variously as the Hackpen, Broad Hinton or Winterbourne Bassett White Horse) is probably 19th Century.

The two are curiously similar, in superficial tems, and roughly equidistant from me, but it was the Wiltshire Hackpen that I visited yesterday, with a view to painting it. I took a walk around the White Horse and decided that a panoramic format would be useful (the sketch shown above was made in two parts as my sketchbook page turned out to be too short). Unfortunately, the sun didn't shine on my photographs from what I considered to be the best location, so I may have to return...

Do you remember the dozen doctors?

When I was asked to revisit the subject, the thirteenth doctor's costume had been revealed, and so here they all are, to date - another commissioned birthday present - in order of appearance.

13 is known as "a baker's dozen" because, traditionally, a baker would add a small loaf known as an "inbread" when selling in bulk to avoid being penalised for selling underweight.

And, of course, Tom Baker is one of the actors (possibly the longest serving actor) who has played Dr. Who. He is certainly the doctor that I remember best. The minifigure representing him is right in front of the TARDIS with K9, which was his robotic dog. 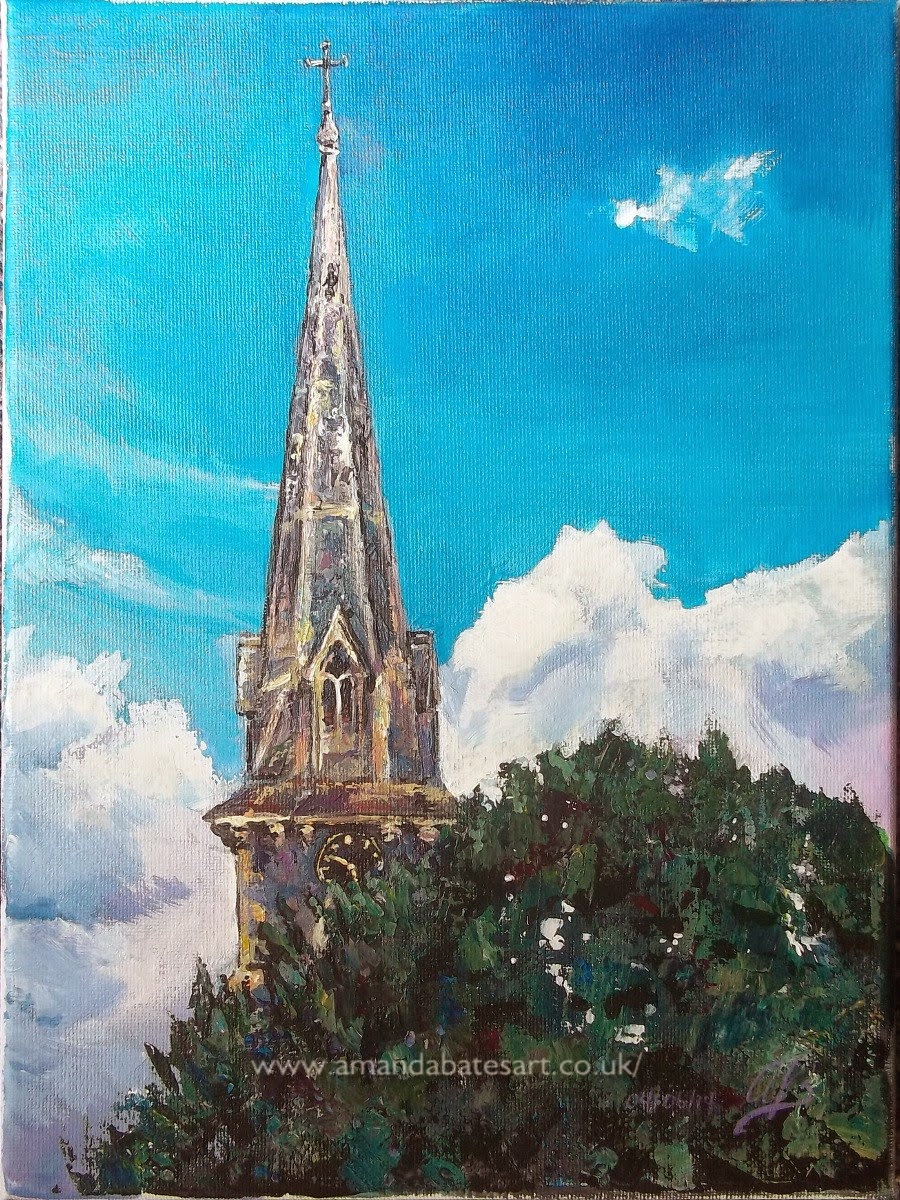 This painting is a gift for someone whom I hope to see this evening, which is why the blog post is delayed.

St Paul's is a wonderfully elegant Victorian church on the edge of the Hampshire village of Ashford Hill, a few miles from my home. This view represents my first view of the building when I was walking in the area last spring: the tall, narrow spire emerging from lush greenery. However, the source image was taken more recently - a week last Sunday - and from the edge of the churchyard, not from the more distant footpath.

I had a few problems with the spire, which wasn't straight when I first painted it, but I think I sorted it out.

Posted by Amanda Bates at 19:00 No comments:

I'm not sure that there is a definitive answer to this question, although the word "fine" seems to imply "of high quality".

You may be aware that I now have a range of limited edition art prints available.

There is a downloadable catalogue, containing details of the images and the prints, at the Art Barn:

The catalogue is due to be expanded soon, as I have a few more prints to be added.

Posted by Amanda Bates at 10:47 No comments: