I'm not terribly clued up on the way the Church of England organises itself, but there are three churches in our local group. There's St Mary's (Kingsclere), St Paul's (Ashford Hill) and St Peter's (Headley)

It sounds a bit like a 60s folk trio.

But these are the churches. Norman St. Mary's, squat and sturdy; Victorian St. Pauls, elegantly be-spired; and miniscule St. Peter's, also a Victorian building, represented here by a pair of sketches. 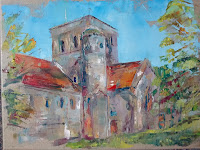 On Saturday, I was at a charity event at St. Paul's, and I was there to demonstrate my knife-painting techniques. I had a gazebo, which was fortunate, as it rained quite a lot.

I had my acrylics...


Both paintings were auctioned for charity on the day.
Posted by Amanda Bates at 23:45 No comments:

Oh, let me in, the soldier cried 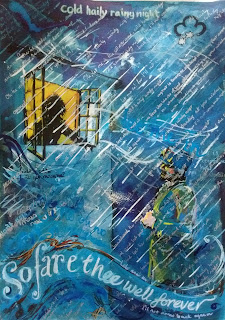 It's a cold, haily, windy night.
Let me in, he says
Oh, but I can't. My parents wouldn't be happy.
I'm going away. I might not see you again.
Oh, alright then.

The words in the song are more poetic. But the soldier is still a cad.
Posted by Amanda Bates at 22:47 No comments:

A Green Man, or the Sleeping Giant

An imaginary figure, part of his environment. Painted quickly from imagination using a restricted palette that included no white and no yellow, but that nonetheless included more colours than I often use...

Posted by Amanda Bates at 23:29 No comments:

It was raining, so I sat under the lych gate to make this sketch.

Curious about the unusual name of this church (many a church is named for saintly Peters, Pauls, and Marys - although I'm not aware of any dedicated to Puff the Magic Dragon), I discovered that Leonard was a sixth century frenchman known for freeing prisoners.

Given the dedication, I was assuming that I would find a definite assertion that the church building was (underneath all the additions and alterations) of Norman origin, but there seems to be no such statement to be found online. It is, however, believed that a Norman chuch stood on the same site.

The history of the building seems vague until the 16th Century, so it seems reasonable to state that the church is medieval with distinctive Victorian additions. It is, however, charmingly quirky.
Posted by Amanda Bates at 23:08 No comments:

A little plein air oil of the parish church, painted yesterday. It's been much altered, but underneath it all, this large edifice is a Norman church.
Posted by Amanda Bates at 23:20 No comments:

His name is Jock Stewart

A folk song, known to me cheifly via the Caitlin O'Riordan voiced version by The Pogues. I do like a bit of gender switching in songs, but I decided to play this one straight as an image. That is the Stewart hunting tartan, by the way. Approximately.

Posted by Amanda Bates at 23:10 No comments: