Publicity! Not the Royal Academy! 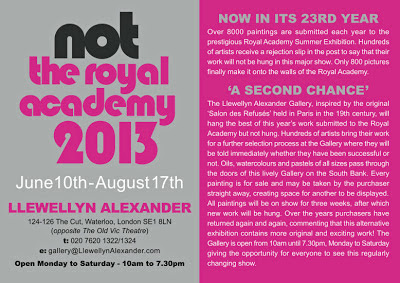 Here's the official publicity flyer thingummy from the Llewellyn Alexander.
As an artist included in the show, I've been asked to help promote the event. As you can see (probably a little clearer if you click on the image to enlarge it), it's a rotating show - this doesn't mean that they've borrowed some fancy stage mechanism from The Old Vic over the road, but it does mean that if you go to see the show, you might not see Avebury Sheep. 'Cos it might not be Avebury Sheep's turn in the limelight. But it can be arranged for a specific painting to be on show at a certain time.

I've just realised that, not only is the gallery close to Waterloo, it is also on the South Bank.

And here's another piece of music that the name of the show makes me think of: