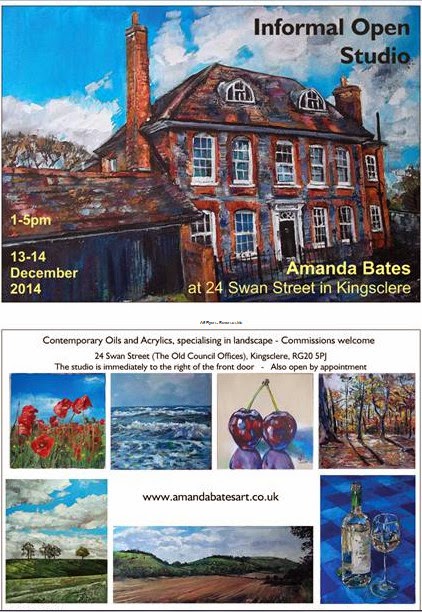 This is a flyer that hasn't quite yet arrived from the printers (shhh, don't tell anyone, but it's the ubiquitous Vistaprint). As you can no doubt see, it proclaims that I will be opening my studio, on an informal basis, during the weekend after next, in the afternoons.

I'm mostly expecting folks from the village - probably people I already know - to poke their heads around the door and see what's what. I'm hoping one or two of them will decide that a painting (or a print) is just what Uncle Quentin* would like for Christmas.

In the meantime, I have a bit of sorting out to do... mainly so that the walls can be reached and things can be affixed to said walls.

* Name plucked from memories of the Famous Five. I expect he would like Corfe Kirrin.
Posted by Amanda Bates at 23:41