Two Days of Being Unilaterally Open

It seemed to be a lengthy process getting the studio into display mode, but part of that was DIY that won't need doing next time (there is some different DIY that is planned but we ran out of time).


We put some picture shelves up. This is what it looked like on Friday:

On Saturday, I went to buy soft drinks from the local shop, and found my first guests (friends and neighbours) awaiting my return. They were a little bit early, but it was alright. In fact, it was lovely, because we had a nice long natter and then another friend/neighbour arrived and she talked to me about a commission and then a friend of a friend arrived ...

And so it went. Saturday was serial visitors who stayed for a while. They cleverly avoided overlapping in most cases but there wasn't enough time between visits for me to start a new painting. I knew all of Saturday's visitors apart from the friend of a friend (and I know him, now, beause he stayed for a while and we talked about arty stuff - he's an artist, too).

Sunday was a little different. My sign was better (the first version was done in thinner pens, because I had mislaid the chunky ones, and so wasn't as bold; it was also lacking an actual picture, which I now think was a major oversight) and I suspect that there was a difference due to the day itself - people may be more inclined to walk around the village on Sundays than on Saturdays. I daresay a few of them had been to church.

One certainly had. I was graced with a visit from the local vicar, who is a lovely person and never mentions the fact that she never sees me at services. With a nice touch of serendipity, she arrived while my CD player was blasting out Kate Rusby's version of While Shepherds Watched... to the tune of "On Ilkley Moor Baht 'At".

The afternoon started with more neighbours (who were also early, and also welcome to be so) and their friends. The younger members of the party waited with barely concealed impatience as I struggled with the packaging on the box of chocolate biscuits that my husband had brought from town on Saturday. Eventually I took my pencil sharpener to it. 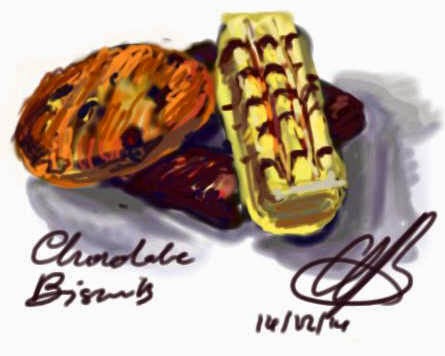 People didn't sem to stay for so long today (Sunday). This was partly because many of them (neighbours and vicar aside) were strangers who had espied my new, improved whiteboard sign outside and come in on a whim. Whims, I suppose, don't expect to be spending original art sort of money, and so - despite twice as many visitors - my actual takings were less than half yesterday's. This is only a disapointment as far as immediate cash flow goes; in the long term, I am hopeful that this weekend's event has done a little towards raising my profile in the village.

I also met another artist - a stranger when he arrived - who kept me happily occupied with art-related conversation for a fair while.

I had time between visitors today to make a digital sketch of some of the chocolate biscuits (I had indicated that this was a possibility) and to come very close to finishing the wave painting that I started right at the end of yesterday.