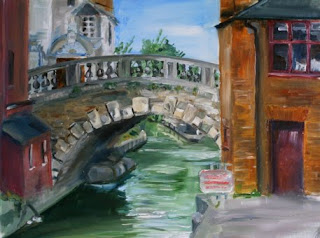 This is another old painting, as indicated by the post title. It was painted with a brush, en plein air, on a Sunday morning. Most of the work was done before the Sunday shoppers started moseying up the tow path (for such was my location). I felt slightly self-conscious, being in such a public place, but as I'd been there for long enough to establish my place - and my painting - it wasn't too bad. Most people wandered by with a passing glance, at most. Of the few who paused, all were pleasant and were careful not to distract me too much.

But the best thing about making this painting was hearing several people commenting that they had never really looked at the bridge before, and didn't realise how attractive it was. It felt good to open people's eyes to the unnoticed beauty around them...

... Even if the bridge is, apparently, a "major landmark" of the Newbury area. It is called the Water Bridge by those in the know (this is something that I have only just discovered).

The bridge is pretty much in the centre of Newbury. The red-painted building to the left is Griffin's butcher's shop; to the right is where The West Cornwall Pasty Company currently reside; at the time of painting, however, this red-brick building housed a branch of Costa Coffee. The rather grand edifice on the other side of the road (left of the canal) is, naturally, the Newbury Building Society. Under the bridge, the edge of the approach to Newbury Lock is just visible.

(Note on the size: the image shown is cropped; the original, being a quick sketch, is unfinished around the edges. That's before you take into account the masked edges from where I taped the paper to the board.)
Posted by Amanda Bates at 13:01