It would have been a shame to waste the unexpectedly glorious weather, so I packed up my kit and revisited an old haunt... this time with a long, narrow canvas that has been awaiting the subject since last autumn. The trees are rather less colourful than they were in September - it's too early for the spring foliage to have come in, even - but the view is still stunning. And using a long canvas means that I can get the whole hill in, without succumbing to the temptation to squash it in or being forced to include too much foreground.

However, it is quite a small painting; there's a limit to the length of canvas that I can carry on the back of my pack and still get along the narrower footpaths. That limit is quite close to 60 cm... 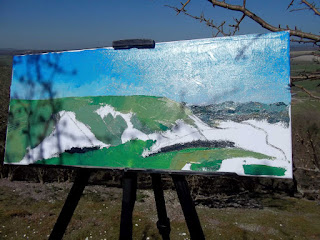 ... taken at lunch time, after just under an hour's work.