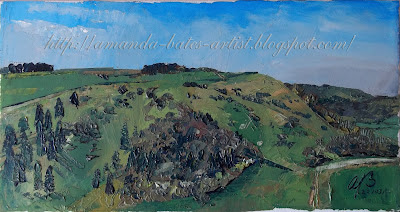 This is a near reprise of the first Cannon Heath Down painting, except that it's 6 months later (and so a different season), smaller, relatively longer (which helped me avoid the awkward foreground detail), and, I think, more accomplished. I guess that all that practice has helped me improve!

In comparison to yesterday's painting, it's painted from further up Stubbington Down (my sitting-on hill, opposite Cannon Heath), and further round - closer to the crest of the pass between the two hills, and to the start of the footpath that heads along the gallops on Cannon Heath Down. The view places more emphasis on the Warren, the first hollow, at the expense of Coombe Hole. The canvas is smaller, too; I only had one 60 x 25, but I did have a pack of three of these smaller "oblong" canvases and I wanted a long support again, to reflect the wide nature of the subject.

You can see the top of the hill from here; the line of the footpath (part of a long distance footpath, the Wayfarer's Walk) is visible along the left hand side of The Warren and, again, after Coombe Hole, as it turns the corner onto Watership Down. The green expanses on the hilltop plateau are the gallops (the green bits at the bottom of the hill are farmland; the white line is a chalky farm track). In the distance, I'm fairly certain that Beacon Hill is the highest point visible. 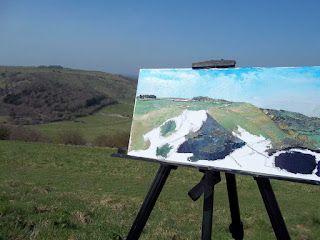 You can see the actual hill behind the painting. This spot was a lot more open than yesterday's pitch - I wasn't hemmed in by hawthorn bushes today, but I did notice the wind more (actually, I think it was just windier), and I did see more people (which was not difficult, as I saw no-one yesterday). None of them came over to see what was on my canvas. I wonder if they were curious, but too polite to interrupt? There were no other artists up there today (there were when I first painted from this position), but I did see someone I knew from the village walking his dog.

As usual, I started with the sky and then did most of the dark areas before working my way around the other colours. Which were mostly shades of green, naturally.