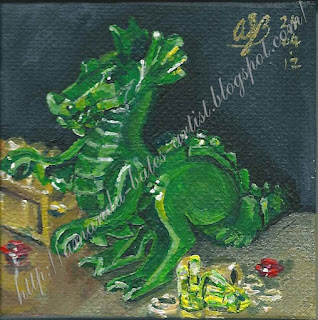 It was St. George's day yesterday, so I'm a bit late with this, I suppose. However, my son's current school project is dragons and that is still ongoing. I like dragons - all those larger-than-life myths, legends and outright fantasies. Not to mention metaphor, of course.

This particular dragon is lurking in his cave with his modest hoard (although he has managed to find a cave with a golden floor). I think he'd better be careful, though - those crystals look like they might belong to the rock monsters!

To add a bit of atmosphere, I lit a candle to the right of the dragon's "cave" (shoebox). That provided a few warmer highlights, which I think look right. I was, however, a bit worried that the canvas might prove to be too small; the dragon is quite a bit larger than the average minifigure, and there was quite a lot of detail to cram in. But it all worked out in the end.