The Bromley Arts Festival: a day in a shipping container 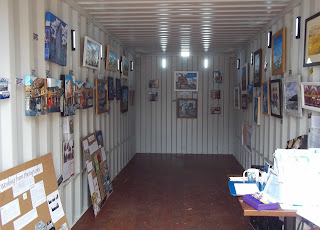 Yesterday was the Bromley Arts Festival. It was cold but dry, and the good people of Bromley turned up in plentiful numbers. Quite a few came to see me and my paintings in the shipping-container-turned-pop-up-art-gallery.


I was sharing the shipping container with the Bromley Arts and Community Initiative, the leading light of which was responsible for getting me started on this project in the first place. This group are committed to breating life back into Bromley's community by providing a community hub and arts centre in the form of a listed hostelry - the Royal Bell. It's a shame I didn't manage a painting of that building (back in August, the Initiative had yet to be founded, and the Royal Bell was "just" another disused listed building); even though my connection with Bromley is tenuous, I fully suppport the goal to keep the spirit of the town alive. I've lived in small towns (and bigger ones) where the spirit was flagging, where people flocked out of town to the nearest city for their art, entertainment and retail needs.It's not good.

Anyway, the "Initiative" were no trouble at all; it was nice to have their excellent company, and they were very helpful when it came to setting up (which took ages), taking down (which was quicker) and the odd amenity / coffee / warmth break.

Did I mention how cold it was?


Aside: Last year at this time, it was unseasonably warm. I sat on a hillside and painted this on 23 March 2012:

... which I took to Bromley with me, as it happens. This year, it was snowing. Well, a little bit.

It was nice to meet the folks from the council, too, who made a fantastic job of organising this event. I didn't see an awful lot of the rest of it - shipping containers don't have windows, and the door was pointing at the entry to the pedestrianised market place - but I did hear quite a bit (we were next to the stage), and everything seemed to run smoothly.

The turn out was pretty good, too, I think. Perhaps the largely clear skies helped.

Several people wandered in to "our" shipping container (it actually belongs to the council, but my friend in the Initiative has taken charge of how it is used, to a certain extent). A fair few of them stopped to chat; some were interested in the art; others in the Community idea (there was a lot of support - which was very heartening), and not a few in both. I had many lovely conversations with our visitors, chiefly about the art (I even got interviewed by one young chap for a youth newspaper). There were curious passers-by; there were a number of other artists who popped in to see what was what; there were locals delighted to recognise the images of their town, and there were people interested in the idea of buying some art. In some cases, I am sure, these groups overlapped.

I sold the two Bromley 7x5 inch paintings, together, as well as Lumberjack Poppies, and Hoist. The latter, of course, mean that the pentaptych is back to being a tetraptych. Which is okay, because I wasn't even sure that Hoist fitted in to start with. But I still have a couple of magnetic pentaptych sets if anyone is interested... I also sold one Bromley book (they are rather expensive but it's the cost of printing; and the price of the copies on Amazon reflect the charges that that ubiquitous bookseller makes) and a couple of postcards.

I think I covered my costs.

Despite the cold (we were, at least, out of the wind), and despite the slight unpleasantness of an extended visit from a gang of dissaffected teenage girls, apparently determined to annoy someone, I enjoyed the day.