Bradgate Heights - not for sale 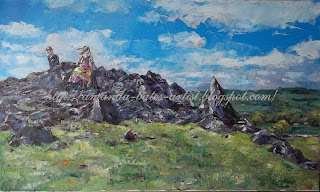 This is based on a photograph of my two children at Bradgate Park, Leicester. The image stood out from the many photographs that I took; it was full of rich contrast. It was begging to be painted.


My daughter insisted on wearing her pretty dress. I insisted on her wearing her practical shoes. She managed remarkably well on the rocks with her long skirts, and this image would have been very different if I had succeeded in persuading her to wear trousers.

The picture makes me think of an Emily Bronte novel and, by extension, a Kate Bush song. Although the county, the weather, and the relationship between the characters are all wrong.