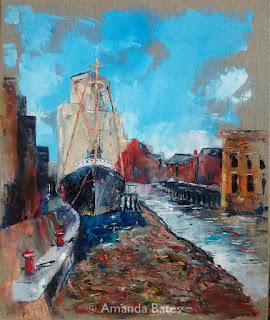 The Arctic Corsair is the last of Kingston-Upon-Hull's side-winder trawlers, efectively the last remnant of the city's fishing fleet. She currently lies on the mud in the river Hull by the museum quarter and is a museum ship herself. She has been there since 1999 (after the time I lived in Hull) but there is talk of moving her to a dry dock in the near future.

The painting is based on a couple of sketches that I made in January 2016. There is a little artistic licence in a few places - the riverfront warehouse on the right, for example, is a complete fabrication! The jagged red brick edifice in the background, in front of the cream-coloured Shotwell building, on the other hand, was there and was in approximately that shape when I drew the Corsair and her surroundings. It was partially demolished and looked rather like a post-industrial castle.