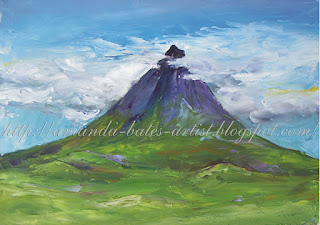 Here's an old painting of Pico volcano, on the island of Pico in the Azores. It was done from a sketch that I made from our Faial hotel room when we were on holiday in the Azores, some years ago. The volcano was a constant presence across the water - atmospheric rather than gloomy. I remember making the sketches (which were rather small - I only had an A5 sketchbook with me), but I didn't recall the painting until I found it by accident yesterday (I was looking for something else). It looks very much like a knife painting, but I think I may have used a brush as well.

Here are the sketches from my book:

The first is water-soluble graphite pencil; the second conventional watercolour. Both were executed on the same day.
Posted by Amanda Bates at 18:30