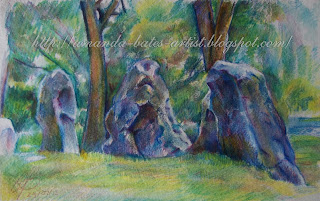 I recently acquired a small set of Caran d'Ache Museum Aquarelle pencils. It's a special "competition pack" that contains six pencils in a tin with a piece of sandpaper. Basically, there are two reds, two blues, and two yellows.

In theory, these pencils should provide every possibility of colour. In practice, they need some getting used to...

Anyway, I decided to try them out on a couple of images of Wayland Smithy (made from photographs), a splendid long barrow on the Ridgeway in Oxfordshire that is definitely on my list of favourite places. The conventional view is a kind of "full frontal" with all the big stones and the entrance to the chamber, but I decided not to go for that this time around.

One of the wonderful things about watercolour pencil is the way that it transforms when you add water. The images below are scans (digitally tacked together because the scanner is A4 and the paper is quarter folio which is roughly A3) of the drawing represented above by a photograph. (I used scans in this case because the light was poor when I finished the dry drawing, and also because there are no inconsistent ambient lighting effects.)

The drawing shown above is the sequel to my first trial of these pencils; the first is shown below. I did "cheat" and adjust this one with a far few dabs of white acrylic. The drawing is of the same site, albeit from a different angle; there is even a tree in common. The holey stone in the drawing below does, I believe, just creep into the far left of the drawing above. 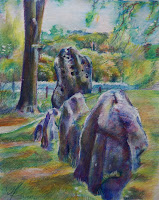