The germ of the style used in my studies for the mural - and the style that I hope will unify the finished scheme - lies in a Fauvism Portrait workshop held in Newbury back in the late 1990s.


Here is Orange Julie, who was painted at the workshop. 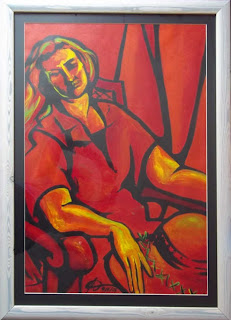 Fauvism was a post-Impressionist movement in France in the nineteenth century. Henri Matisse was its most famous proponent. The name - a derogatory one - means "wild beasts", and refers to the brisk, rough brush strokes; not a feature that I made use of for Julie.

Other features of Fauvism are flat patterns, unrealistic colours and outlines.

I'm taking some of these elements, along with the idea of flat colour (which means a block of solid colour) - for use in the mural scheme.

Flatness is a "Modern" concept in art, and is an element of the way in which art can refer to itself as art - essentially, it's saying, "Look, I'm not real, I'm not a photograph, I'm not one of those fuddy-duddy old masters; I'm a painting." (Fauvism has so many of these indicators that, if it didn't already exist, teachers of Art History would have to invent it.) Flatness of colour is epitomised in the "posterisation" of printed advertisements such as the fantastic railway posters from the 1930s or so. You also see it in the "pop art" of the 1950s and 60s; Andy Warhol's work is a fine example.

In part, the style choice is for practical reasons.
However, the style is also a good one for murals. It is bold and, I think, distinctive. The colours will be bright but realistic (no doubt the kids can cope with unrealistic colour, but there is no point scaring the parents!). I think it strikes a balance between Modernity and tradition, and I hope that it will not date.