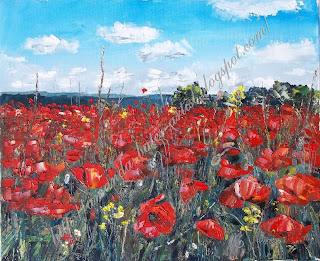 On Saturday, I drove to Basingstoke. This is neither very exciting (although I did buy art materials) nor very far (less than ten miles), but I did spot a very pretty field very close to the town they (apparently) call "doughnut city." A very pretty field with lots and lots of poppies. And a handy layby nearby to park in...

On Sunday, I returned (this time without the children), parked in the handy layby, and took lots and lots of photographs.

This isn't from a photograph.

The photographs were literally "for a rainy day". My one potential painting day this week - today - was decidedly not rainy. So I hied me off back nearly all the way to Basingstoke and sat in the field with my painting gear. For once, it didn't matter that I didn't have a cardboard box to fit my canvas.

Each time that I was in the field, other people drew up in their cars, attracted by the display of the poppies. Many brought cameras. Some brought serious cameras. (But the poppies brought smiles to everyone's faces, regardless of their lenses.)

Today, I met one of the photographers who worked on a book called Where Have All The Flowers Gone? (reminds me of a song), subtitled Restoring Wildflowers to the Countryside. He told me that the yellow flowers that I had assumed to be escaped oilseed rape were actually a wildflower called Charlotte (which made me think of another song). I like that it is a wildflower and not an agricultural escapee. There were little tiny white pansies in the field, too - I did put them in the painting, but it's hardly a botanical rendering, so you might have difficulty seeing them.