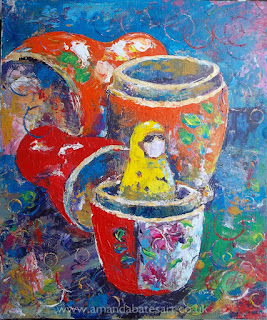 This was painted mainly to try out a set of cheap Chinese panting knives that my husband bought on eBay from China. The Russian Dolls were loitering in the dining room where my daughter had left them and they presented themselves as a subject... quite an interesting subject, I thought.

I could have gone for a fairly conventional approach (even with the knives). I suspect that the semi-random selection of arylics that were in the house (as opposed to the studio) would have permitted me to do so.

However, I thought I would try and take the subject into another real; use the shapes and the concept and make something a bit different. Thinking about the shapes led me to circles and I looked around for something to print with... As it happened, I had "killed" two tubes of acrylic (the azo yellow ran out and the deep violet split open) so I used the lids of the defunct tubes.

Family Circles
Acrlic on canvas-covered board, 12 x 10"
Posted by Amanda Bates at 11:55