Yesterday, three fifths of Artikinesis visited Basing House as part of our Basingstoke Project. I have visited this fascinating site several times, but always with children in tow; I have long had a hankering to paint there. Specifically, to paint the kitchen fireplaces in the ruins of the Norman Castle (built in the 12th Century by the de Port family).

So, I took my oil paints and all of their plein air accoutrements, and spent a most enjoyable couple of hours making a visual exploration of a selection of nooks and crannies within the banks of the castle. My friends explored the site, making their own pictures. 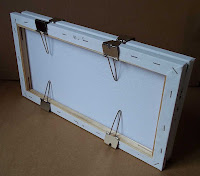 Before we left Basing House, I paused to make a sketch or two, leaving my canvas (clipped to another, blank canvas of the same size using the clips illustrated right) on the ground (underneath the cannon, where I thought it would be out of the way) ...


... when a couple of inquisitive chows came up to say hello. One of them decided to investigate my canvases, and placed a paw on the back of the fabric! The dogs' owner was very apologetic, and I decided that perhaps I ought to take better care of my canvases.

When I unclipped the canvases (not something to be done lightly, as it's rather fiddly) later on in the visitor centre, I discovered that my optimism about the robustness of the thick, wet paint was justified. There was a bit of "printing" on the blank canvas, but no apparent damage to the picture itself.

I was showing the visitor centre staff my painting. I had mentioned our plans as we bought our tickets, and interest had been expressed at the time. It transpired that one of the two ladies on the desk had started (but not finished) an acrylic-on-canvas of very nearly the same subject. On a very similarly sized canvas! Hers was in a cupboard behind the desk; when she retrieved it, it was covered in dust and burnt on one corner from the heat lamp. I suspect that she may never finish that painting...

De Port's Kitchens will form part of the exhibition, The Basingstoke Project. This will be Arikinesis' first show, and is to be held at Proteus in Basingstoke from the 16th to the 26th of November.

It should be dry by then.
Posted by Amanda Bates at 22:58