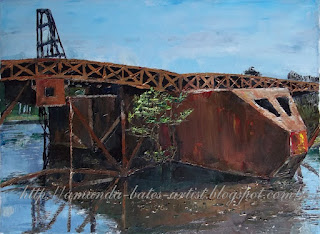 Greenham Common is a funny old place. It's been open to the public again since the late 1990s, but most people will remember it as the site of an American airbase, the home of Cruise missiles, and the notorious Women's Peace Camp. The Americans took their cruise missiles home (and eventually the women left, too). A small peace garden memorialises the occupancy of the women but the Americans left a lot behind, including several massive missile bunkers (still fenced off), a small township of military buildings (now the site of a thriving business park), and a collection of airbase detritus. Most of the latter is small stuff - fire hydrants and chunks of concrete runway that didn't get broken up - but, tucked away in a corner, there is this.

It's a fire plane. Once, it allowed the resident fire service to practice putting out aeroplane fires (or "airplane fires", as the Americans would say). Now, it sits in a poorly fenced-off shallow concrete pool, slowly rusting away. The vegetation has started to move in. It's becoming part of the common. I've been fascinated by this construction since the first time I saw it. It's a curious object, an angular facsimile of an aircraft, incongruous against the heath it sits upon. It's rusty surface brings to mind Richard Serra's work, or Anthony Gormley's Angel of the North - but it was never intended as a sculpture or a piece of public art. It's essentially a remnant, almost a revenant. I think it has a similar appeal to industrial ruins; with its function exhausted, all that is left is its form.

I painted this from a photograph taken a month or two ago. It took me two evenings after the children were in bed. I spent the first evening painting the sky and blocking out the main areas of colour, with emphasis on the areas that would require detail on top. this is what it looked like on that first evening:

The common itself is at peace now. There is woodland and heathland; large ponds and gravel banks. Cattle and Exmoor ponies graze the wide plateau as people variously walk, run, cycle, and have picnics. It's a special place.