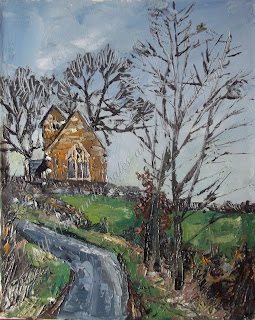 This is Welby Church in Leicestershire, on the edge of the market town of Melton Mowbray.  I grew up in Melton, and the building is special to me. Its incongruity - the church without a village - its isolation (it can seem like a lonely edifice, particularly on grey, wintry days like the one that this image represents) - its sense of history and, perhaps most important to me when I was a teenager, the way that it seemed to represent rurality in close proximity to the town.

The medieval village of Welby is no more - it was "lost" due to enclosure between 1450 and 1700 (i.e. the local landowner decided that sheep were less bother than crops - which required a lot of agricultural labour, increasingly expensive after the black death - and so the villagers were evicted and the common land enclosed). The site is now classed as an "Antiquity (non-Roman)".

The church is the most obvious remnant. It sits just shy of the crest of the hill on a narrow lane, and is constructed in local sandstone. It is thought to have been built in the latter part of the 12th Century, in the time of the first Roger de Mowbray. Services are still held there, although not regularly. It seems to be a popular little church - on the occasion of a service, the sides of the little lane are usually clogged with parked cars.

These days, its nearest neighbours are a farm and the site of a former (never functional) coal mine, now a business park. Not much further away, Melton's sprawling residential fingers provide a cohort of leisure walkers who often use the building as a landmark.

The painting is based on a couple of photographs that I took on a recent visit to family in the area. It's rather small - I had limited time this afternoon, and it occurred to me to create something to fit in a frame that I already have. But, then, the church itself is not grand. I think that the size suits the subject.

And here are some in-progress shots: