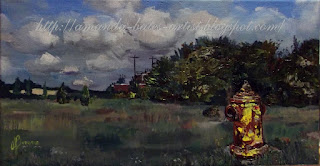 The UK doesn't really do overground fire hydrants. Not on streets, anyhow. We may have them on airfields, I suppose, but I don't tend to hang around on many airfields... except for this one.

I blame the Americans. They had an air base at Greenham, as previously noted, and left a few things behind. This painting shows the air traffic control tower and a well-weathered fire hydrant.

I used a brush  - for the background - and a knife - for the hydrant and for texture on the trees - on this one. In acrylic. The knife work was just a little frustrating, because I'm used to being able to push the paint around, but the acrylic started to get all plasticky after a short while. So I put some more paint on it.

The photograph of the painting was taken yesterday evening under artificial light. This morning's light is very blue and I haven't been able to correct it. I'm going out (painting) today, so new photographs won't be forthcoming until later.