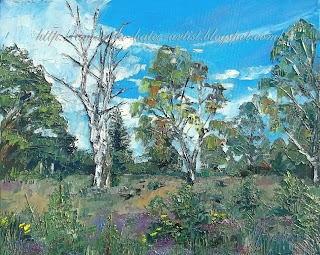 I spent the afternoon on Greenham Common today, and this is the result. I wanted to show that the Common isn't just about the old air base.
Parts of it are SSSIs (sites of special scientific interest), and it is really rather beautiful in places. This is the west end of the common, a lightly wooded heathland. I walked through a more heavily wooded area on my way to the heath, which is a popular place for us to stop for a picnic, and I was torn by the array of subjects. But it was the grassy heath - with its trees (predominately silver birch), heather and gorse that I was thinking of, so it was the grassy heath that I stopped on.

The dead tree was a landmark of sorts, and provided a focus for the painting. The sky was quite fascinating, too - the conditions must have been just right for aeroplane contrails, because there were lines all over the heavens.

It seems that air transport is difficult to escape at Greenham - even now that the airbase has gone.

Here is an in-progress shot: 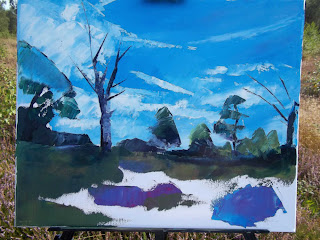 and here is the finished painting, just before I packed everything away: 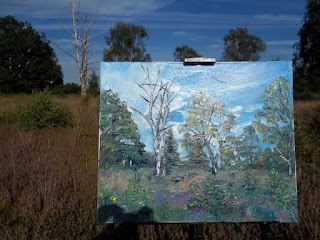