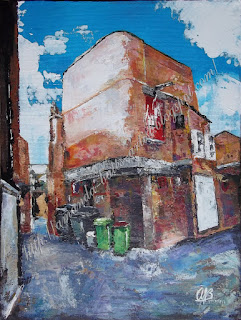 This is (possibly) not a fifth painting in the East Street tetraptych/pentaptych. But it is from that site; it's the building in the middle.

Why do I say it might not be part of that multi-part work? Well... it could be, but it isn't a straightforward fit. It's not square, for a start (all the others are - they're 30 x 30 cm square) - although it does share a dimension (it's 30 x 40 cm). Neither is it the same medium; this is acrylic, while the others are oil. But it is a knife painting. It's also a box canvas - but the edges are plain Payne's Grey, not an extension of the main image.

As an aside, the palette is a bit different, too - this is my first try at a "Process" CMYK painting. Except with white in it, too. CMYK, for those who didn't know, are the ink colours found in most electronic printers. They are Cyan, Magenta, Yellow and blacK. I used heavy body acrylics, which I've been meaning to try for ages because they are meant to be more effective with knife techniques.

Actually, all those differences and similarities might qualify it to be a centrepiece to the whole. What do you think?