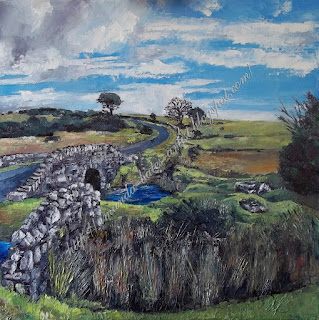 On our way home from West Cornwall, I suggested a small diversion onto Bodmin Moor. It was a gloriously sunny day, and I was keen to snap a moorland scene for reference purposes. And my husband was quite keen on a pasty break (it was lunchtime, and he is, indeed, a true Cornishman).

So we drove parallel to the A30 for a bit. I was looking for something like a windswept tree with a rock or two nearby. The bridge - or it two bridges? - was far more than I was hoping for, from a random motorised excursion onto the moor (although there are some stunning tors on Bodmin Moor, not to mention standing stones and at least one stone circle. Must try harder next time!).

The name of the bridge - which crosses the River Warleggan - refers to the nearby hamlet of Temple, itself named for the Templar knights who founded a hospice there in the 12th Century.

A couple of in-progress shots: 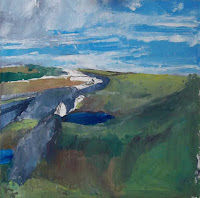 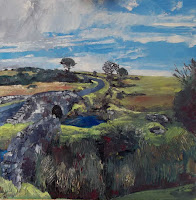 EDIT: Vote for this painting in The Artist's People's Choice Award! See this post for details.
Posted by Amanda Bates at 09:31