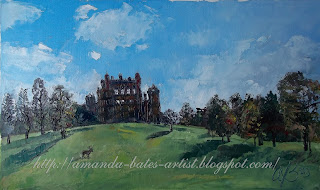 Wollaton Hall, an Elizabethan country house, is in Nottingham. Well, it's in Wollaton, which is in what you might call Greater Nottingham. The house - set in a fabulously large park - has been in the hands of Nottingham City Council (formerly Nottingham Corporation) since 1925, and is a rather splendid museum.

It's also the home of Batman, insofar as it was used as a location in the recent Batman film, The Dark Knight Rises. I find it pretty apt that Batman has a roost in Nottingham, because the village of Gotham (famed for its residents who pretended to be insane) is in Nottinghamshire.

This view - based on a couple of photographs taken in autumn last year - seems apt for the Batman theme. Oh, did I mention the deer? Wollaton Park is home to herds of Red and Fallow Deer - that's a Red Deer stag ambling across the hill in front of the house.