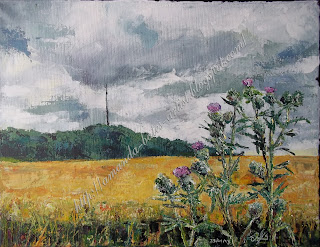 Of course, this isn't a variety of thistle called Cottington's - the name refers both to the hill (with the radio mast atop it; a local landmark) and to my previous paintings of poppies in a similar location.


The idea here was to knife-paint, in acrylics, the sort of countryside landscape that I'm more comfortable with in oils. But I didn't want to replicate anything I'd done before. I chose this because of the familiarity of the hill and the location, and the distinctions of the ripe wheat and the different foreground plant.

I also used my heavy body CMYK paints. I wasn't going to use the "K" at all, but when I was almost finished, I needed to restate the "dark" at the edge of the wheat, and black made a useful shortcut.

The basic blocking in of sky hill and field were very similar to how I work in oils, although the lack of movement in the acrylic once it's put down on the painting surface tends to make the gradation of colour less subtle - and to make it easier not to disturb previous marks. The thistle was, inherently, an awkward subject to paint with a knife. In oils, it would be tricky to lay the narrow lines down on top of the background and to keep them distinct. In acrylic, this was no trouble. But the stems vary in colour and have highlit edges, so several passes with the knife were required. Invariably, the previous line or lines had dried, and it was difficult to avoid a corrugated surface on the canvas. The pointy leaves and curvature of the stems presented their own problems.