Self Portrait in Derwent Drawing pencil, on black paper

How I Created my Latest Avatar


The first three "in-progress" photographs that I took feature the pencils used up to that point.

1. Wheat
(this initial drawing got corrected)
2. + Mars Violet, Smoke Blue
(because I'd had to change the lower part of the face, I worked up from there.
These three colours work well together)
3. + Yellow Ochre

I wasn't quite so assiduous about the pencils after that, but I think I can remember...

4. + Solway Blue, Chinese White, Ivory Black
(finally! An eye...)
5. + Mars Orange
(Two eyes! Adding a bit of warmth with the orange)
6.  + Ruby Earth, Ink Blue
(More warmth, and a deeper blue for the shadows; and an ear has appeared)

You would think, by now, that my own high forehead wouldn't catch me out, but it seems that, almost every time I do a self portrait, I run out of space at the top! 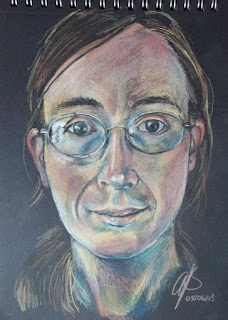 Some musings on self portraiture and a few other examples can be found here.