From One Hill Fort to Another 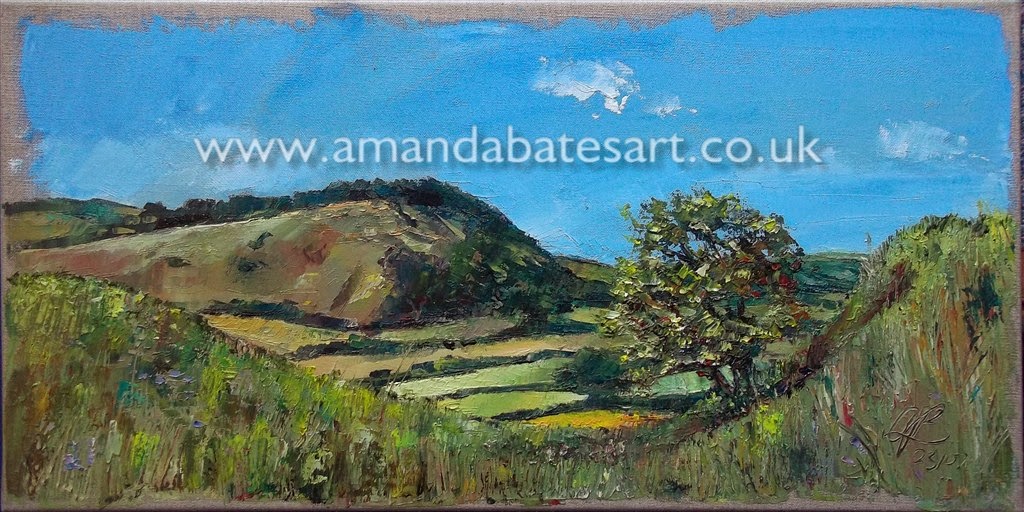 This was a plein air painting made back in July, just before the schools broke up and summer holiday madness commenced.


I sat on Ladle Hill, looking at Beacon Hill though one of the ditches of the hill fort (apparently never occupied) on Ladle Hill. Beacon Hill (the other side of the A34, a very busy dual carriageway road) has a hill fort atop it, too - a more impressive one, that was occupied in prehistoric times. It also is the site of the grave of the Egyptologist, George Herbert, 5th Earl of Carnavon (Highclere Castle, the Carnavon "seat" is nearby).

Ladle Hill is less well known and much quieter than its cousin over the road. But it does offer glorious views. I wanted to capture Beacon Hill, and I wanted to show the earthworks of Ladle Hill. When I sat down (on a hot day, aware that time would be short), I thought I had a good vantage...

It was a shrubby little tree, nice enough in its way, but... completely in the way!

The tree had to go. And it had to go before the holidays kicked in - before the impasto (textured) paint dried and the surface became impossible to work over. I scraped it off.


And so it remained all summer. I was offered - and accepted - the huge Porthtowan commission, which took up most of my time since the children went back to school.

But, after completing Porthtowan, I had paint left on my palette. Paint entirely suitable for restating the landscape and - yes! - restoring the little tree. (It could only ever be a little tree up there - it's quite exposed to the weather, and the chalky hilltop doesn't offer much in the way of anchorage or nutrition for a larger tree.)

I played around a little with the contrasts and the colours on the foreground slopes in an attempt to clarify the distance between here (Ladle Hill) and there (Beacon Hill). I think I might have just about rescued it.

But I willl be wary of hastily chosen vantages in the future.

And I might remember the sun lotion next time I go painting in such warm weather.

From One Hill Fort to Another
Oil on linen canvas, 30 x 60 cm