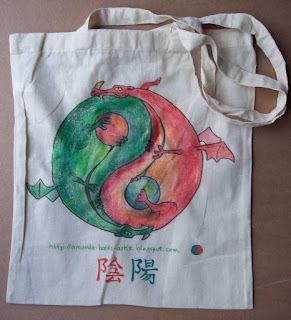 And here is the second of my attempts to twist these flexible fellows into the Taoist symbol for light and dark. I wasn't quite satisfied with the first one; while it did work, it had too much space in it. This time, the dragons (a different pair) are trying really hard - you can see that they are both having to hold their tails in place!

I had thought, originally, that the little round bits (an integral part of the yin-yang design) that the dragons were holding in their tails first time around were jewels - dragons being famously fond of such riches. But now I realise that they are actually balls, and that the dragons were playing catch. Look at their arms (forelegs?). Ready to catch...