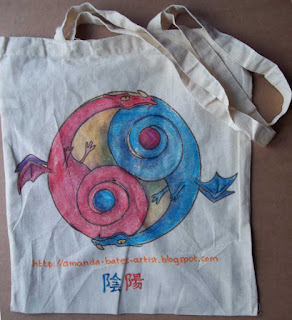 I had thought that I had done with the dragons for a while (they're great fun to draw and noodling with the Celtic-style knotwork and borders was fun, too, but after a while you just need to do something else...) but then I had the idea of using the dragons' vaguely comma-like shapes to make a yin-yang symbol. Or something rather like it.
And here is the first attempt. There will be at least one more...

I had thought that maybe the dragons would be red and green - good dragon colours - but then a chance exchange at work made me decide otherwise. I was doodling on my notepad, prior to the start of a meeting, and my neighbour looked over and said, ah, the yin-yang symbol! Hot and cold winds, you know... Well, I didn't know. But here in the west, at least, everyone associates hot and cold with red and blue respectively. And, so, the dragons are red and blue.

And the Chinese characters? Yin-yang, of course. I hope I got them more or less right; I'm no expert (in fact, I don't recall ever having tried to draw Chinese characters before). I liked the complexity of the traditional Chinese: 陰陽 more than the simplified version: 阴阳.