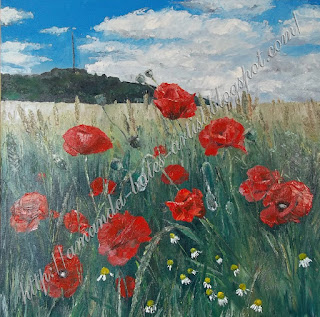 Please excuse me for posting an unfinished work.

But, you see, all the visible bits are finished. It's a box canvas, and the lady who asked me to to the painting (yes, it's a commission!) naturally wanted the edges painting. I've done three edges. But it's sitting on the bottom one, and I think it's wise to leave it in that position until such time (about a week) as the rest of the painting is touch-dry. It is a little bit bigger than the 7x7cm acrylics I've been doing.

In fact, it's so big* that I needed to dig my studio easel out from the corner where it has been, sadly, gathering dust since the children arrived. Not that I minded. It's a very nice easel, and it feels right to stand to paint. It was rather nice to have the house to myself this weekend (those children were camping with Daddy) so that I could clutter up the living room with painting stuff for a change, too!

With a bit of extra space to play with, I included some chamomile this time (there was some alongside the poppies when I was taking the photographs). This painting is done from photographs, as were the other two, but the subject is becoming more and more of a composite each time that I paint it. And the wheat is ripening nicely, too.

----
*Okay, I know that 30" square isn't that huge - but it's still pretty big if you might be thinking of carrying it up a hill and then down again - only wet, this time. I didn't do that, of course. It was painted indoors. I did, however, note that there was a noticeable increase in the "bounciness" of the canvas itself, on account of the frame being so big.

Other related posts:
Edit: The painting is finished!