On the Slopes of Ladle Hill 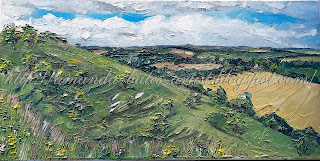 Ladle Hill is within walking distance of my house (around 5 miles, I think), but, but the time I get there it's almost time to come home and there is certainly not enough time to paint.
So, dear reader, I drove - to Nuthanger Down, where there is a road with a handy layby. After trying to take a slightly circuitous route, I missed the path back up the hill (I later realised that it was the overgrown almost-path that I'd decided not to even try because it was overgrown with nettles and I was wearing cropped trousers) and ended up going straight up the steep north slope. Which was so stunning that I decided to leave the hill fort at the top for another day (I did go up'n'over at the end of the day, though. It would have been silly not to, especially as the footpath was thataway).

I had very nearly finished this painting when I heard a cheery "Hello" from behind me. A couple and their dog came down the hill, stopping for a short chat en route. They were the first humans (and dog) that I'd seen since leaving my car several hours beforehand. And, apparently, I was the first painter that they'd ever seen on the hill - and I got the impression that they were regular visitors thereto - not least because their house is in the painting...

There are, I'm afraid, no in-progress shots, because I unaccountably forgot my camera. So the people I spoke to are the only people (apart from me) to have seen the painting before it was finished.

(Story continues in the comments... )