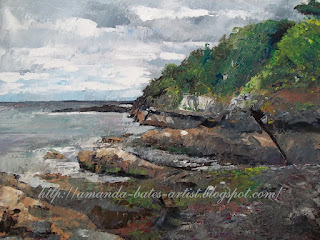 This is a view from the beach on a small promontory of land called "The Herra", looking out to the mouth of the Helford (and so out to sea).  The Herra - owned by the National Trust, as is so much of Cornwall's coastline - is in Gillan Creek, which is a tributary of the Helford River in Cornwall.


While my husband (the proud new owner of a Mirror sailing dinghy), his parents and our two children messed around with and in boats, I - being a seasickness-prone landlubber - went for a wander up the coast path with my painting gear, decided that there were no suitable spots up there within range of our temporary base, and returned to the small but tempting mass of land that is the Herra.

The weather being slightly less than ideal, I plumped for the shelter of the rocks on the beach, which did an excellent job of preventing the wind catching the canvas, but, naturally, did little to keep the showers of rain off. Fortunately, I had my waxed hat and Goretex jacket (both with a little extra added colour from previous expeditions - I'm sure that the oil paint can only enhance their waterproof qualities!).

I think I would have preferred the sky to be bluer, and - while I was glad that the giant container ship left the scene before I felt obliged to include it - I do regret not having managed to capture a sail out there (something that would have definitely fit the blue-sky version in my head). But the finished painting is really about something else, I think; it's about a lonely little cove and the sea that laps its pebbled shore. It's not about boats, be they pleasure launches, fishing boats or container ships.

Incidentally, the tide both went out and came back in while I was painting. The painting shows it almost all the way in, although I suspect that some of the rocks are more exposed than they should be for the tide level. It's a problem that I haven't come across before - there are, after all, no tides on hills.

And it was a novelty to walk up the hill as I left my painting pitch.