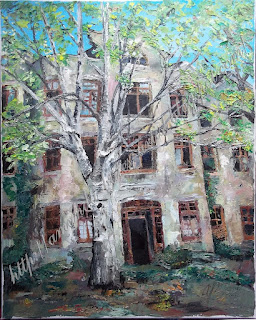 This is a work from a photograph and from a faulty memory. I took the photograph on monochrome 35mm film in the spring of 2003. Memory - aided by suggestions in the black and white image, and supplemented by imagination - supplied the colours.

My colours seem to be out a bit, looking a the available images on-line. This was something that I avoided looking at prior to finishing the painting - which was done over several evenings, started while awaiting the big box canvas for Poppy Box, abandoned during the painting of that commission, and completed yesterday evening with the addition of the tree's upper branches and leaves. I didn't want to be influenced by any reality outside of the monochrome reflection of reality and my own (rather distant) recollections.

I did recall a yellowness about the exterior walls, but my version was rather faded. The tree is, I now believe (thanks to another blog), a plane tree. I treated it as a silver birch (a tree far more familiar to me; I spent far more time in Sherwood Forest as a child than I ever did in London). 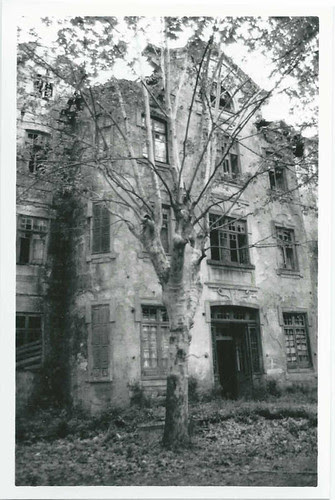 I've always rather liked this photograph. (I do like monochrome photography, although I don't claim to be terribly good at it). It was taken during a holiday in northern Portugal, when we were staying at the nearby Vidago Place Hotel. It was a surprise to discover the substantial ruins of the Hotel do Golf - seemingly untouched since the fire that "destroyed" it in 1967 - occupying a huge site and open to any passer-by. We didn't venture far into the building, fearing it to be unsafe, but it seems that exploring the interior with video camera in hand is a popular pastime. Well, there are several Youtube videos of such adventures.

The place was originally known as the Hotel Salus. It seems to have been purpose-built (unlike the Vidago Palace, which was built as a royal retreat), and opened in 1918, a mere 8 years after the Palace started operation as a hotel. Vidago is a spa town - the waters are pleasantly salty - and it seems to have been quite the destination at one time. But the town's heyday is long past. It does, however, retain a genteel presence against the stunning, mountainous landscape of the area - aided to no small degree by the splendid refurbished decadence of the remaining hotel.

The information available on the Web about the Hotel do Golf /  Hotel Salus is slight, and (not surprisingly), in Portugese. I employed machine translation to garner the details above, and there is little more to be read on the subject. Images, however, are a different matter. Several old postcards can be seen on the Web, revealing the clean lines of the massive hotel in its glory days. Modern day photographs revel in the building's delapidated charm, much as I have done. I haven't found any other post-ruin paintings (apart from a delightful sketch in this travelogue blog), but that isn't to say that there aren't any.

Further reading (in Portuguese) and looking:
And don't forget the in-progress post, here

For Sale
In-progress shots here
Posted by Amanda Bates at 20:24