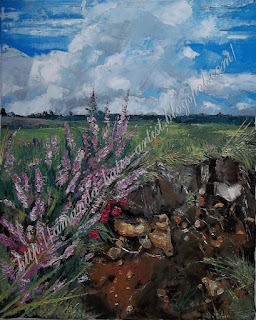 One of this summer's most far-flung day trips was to the south of the county; we were planning to visit a specific historical attraction, but it turned out that it was closed on Wednesdays. So was the next random attraction that we found via the increasingly popular pastime of "brown-signing". Refusing to believe that Hampshire was closed on Wednesdays, we continued on to the New Forest. Which was, naturally, open.

So we got out of the car and went for a very lovely walk. The children didn't even whinge very much, which was nice.

Family day trips are not, alas, the right occasion for rucksacks full of painting gear. But nobody minds too much if I take snaps of the scenery as well as the children, so I did manage to garner a few reference shots.

I was particularly struck by the heather, which painted the landscape in swathes of purple. It looked nice close-up, too.

It was one of those reference shots that I used for this painting. The photograph was taken from a dry stream bed (an unexpected find in this wet summer), and I liked the contrasts between the exposed soil, with its embedded rocks; the heather; the land rolling away to the horizon; and the sky - which, for once, obliged me by being partly blue.

I had had alternative plans for today - which I have to myself on account of a scout camp - but the forecast (and eventual occurrence) of thunderstorms put paid to that. So I stayed in and painted.

Here are the two in-progress photographs that I remembered to take while painting: 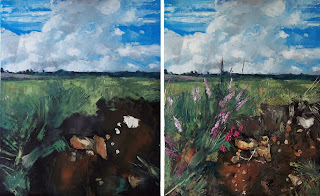