I wrote enough about Quink in my last post. This post has a couple of brush drawings that were made with Quink, which was then diluted with water and moved around the paper. The first drawing has a little white acrylic in it, too.

Mên-an-Tol, on moorland in Penwith, Cornwall, is a neolithic structure consisting of two standing stones and an upright ring. It's easily accessible on foot and seemed very popular on the misty August day we visited. This view - from a photograph - is a bit clichéd, perhaps, but it's still rather cool.

I drew the shapes of the stones and their surroundings with my big brush and then worked into it with water and white acrylic. I'm particularly pleased with the grasses around the stone, which would have been nigh on impossible without using some white media!

I also added some inked detail with the dip pen. 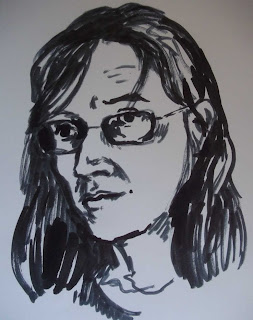 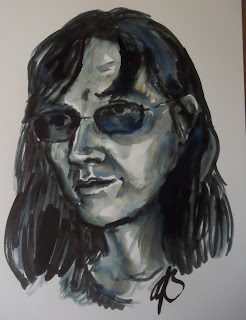 The self portrait shown above was executed very quickly - it probably took me about half an hour altogether. I was wearing sunglasses, but refrained from darkening the lenses at the initial inking stage, knowing that the colour could be dragged in from the frames. There is no acrylic and no pen work in this one - purely Quink, water and one rather large, round brush.
Posted by Amanda Bates at 23:15