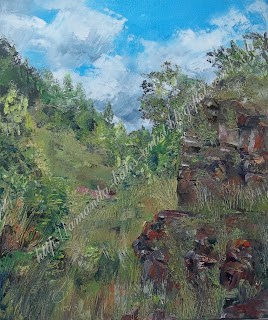 Once upon a time, they quarried ironstone here; there are even mine workings where, I imagine, there was a particularly good seam.
The entrances to the mine workings are interesting, but I couldn't quite get a satisfactory view that would work as a painting. Oh, okay, I admit it, they - or, rather, their surroundings - weren't pretty enough.

So I painted a rock face. And the steep sides of the quarry, which is now a nature reserve. And, crucially, a bit of sky... which, as you can see from the few in-progress shots, was the first bit I painted, after sketching the position of everything in in charcoal. 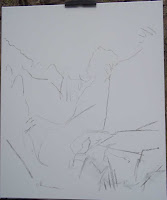 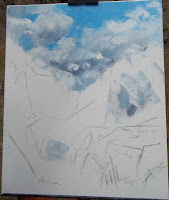 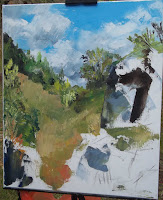 The quarry is called Brown's Quarry. It is part of the Holwell Reserves, close to a village called Holwell, which in turn is near Melton Mowbray in Leicestershire.

(I grew up in Leicestershire and was visiting my mother, who kindly took my children out for the day, leaving me to have a good explore around the nature reserves and spend a few hours painting. In return, when she enthused about the results, I gave her the painting.)