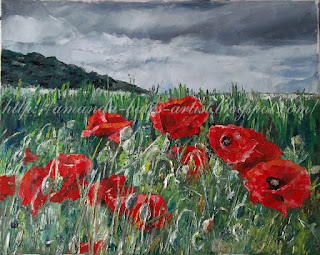 Well, the poppies don't belong to Cottington - not as far as I know, anyhow. But that is Cottington's Hill in the background (Mr. Cottington did build a big house up there, but the house is gone, now, and the most significant structure on that hill now is the TV and radio mast that can be seen on this previous painting). No, these are wayside poppies, growing on the field margin - in this case, a wheat field.

It was a fairly gloomy day when I took the photographs this is based on. I wasn't necessarily thinking of painting the subject, but I liked the shots in themselves, and when I posted one on Facebook, my friends' enthusiasm persuaded me to give it a go. I like the way that the flowers form a rough arch, and the way that their brilliant red stands out against the greens and grey. The subject is one of very few (perhaps the only one) among my recent output that has called for Cadmium Red, that ruddy stalwart of the paintbox.

I convinced myself that it was OK to paint this from a photograph on a number of counts: the viewpoint is so low that I would have been very uncomfortable trying to paint it; it's right on a fairly busy (but wide) footpath; and the poppies were blowing in the wind somewhat. Then, of course, there is the time issue. I just don't have the freedom to spend the best part of a day painting now that I'm at work full time.

It took me three evenings to complete this painting, as indicated by the in-progress shots below.


All of the in-progress shots were taken in artificial light (no flash). The main shot was taken in shaded daylight.