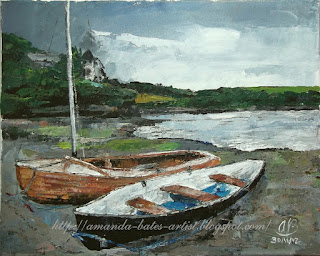 I like the idea of boats better than the reality of (being in) them. The photograph that this painting was based on was taken on the same day that I painted "From the Herra" en plein air in oils. The painting was made on Friday; it was the first time for a while that I have tried to make a whole knife painting in acrylics (rather than adding foreground detail to a brushed background) - although I did sign it with a brush.

I was expecting to be able to make cleaner contrasts more easily - which is one of the reasons that I chose this image - and it was, indeed, so. I think it worked fairly well. My next experiment with knives and acrylics will be to attempt a subject more similar to the ones that I favour in oils.