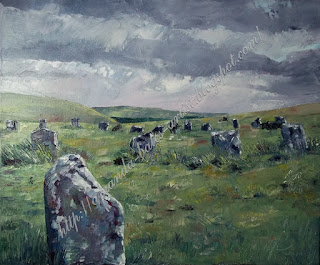 I couldn't resist calling these beasts bullocks, despite there being no absolute evidence to support this, and me being sufficiently unfamiliar with bovine appearance to say for certain that these are male animals.


(Oversensitive males should look away now).

Of course there are no sheep. But there is a stone circle, and that stone circle, which is on Dartmoor, is called Grey Wethers. (I imagine a disorientated shepherd spotting the stones on a misty day and making the incorrect assumption that they were his flock of wethers.)

The image is from a photograph taken on a daywalk on Dartmoor in August 2009.