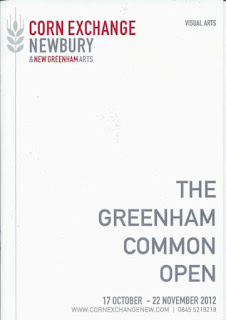 I've never been to a private view before. I didn't really know what to expect - loads of arty types, walking around in haute couture, holding glasses of wine and spouting pretentious nonsense or incomprehensible gossip?

But this was Greenham Common, Newbury.

There was wine. But I was driving. There was orange juice and mineral water, too. And nibbles.

There were arty types (well, I imagine they were arty types), but I don't think that there was much in the way of haute couture. Not that I'd recognise such a thing even if it tapped me on the shoulder and introduced itself. I didn't hear any pretentious nonsense or gossip of any kind, but I could just have not been paying attention. But I suspect that the conversations were much more sensible.

I managed to chat to a few people, mainly other artists (and their boyfriend's father), and we mostly talked media (that's the stuff you paint - or draw - with). One lady, whose work I had been admiring, "confessed" that she didn't work in a realistic style because she found it difficult and frustrating. I suspect that she was exaggerating a little. And we talked subjects (only one person I spoke to (the boyfriend's father) knew of the Fireplane's existence on the common).

It did seem as if all of the other artists worked out of a studio (I work out of a dining room) and that art was their main occupation. The other work was all more conceptual than my relentlessly figurative (and rather traditional) pictures, and it was sometimes difficult to draw a link between the works and the theme of the exhibition (the "geographic, political and emotional themes drawn from the significance of New Greenham Arts and its location on the de-commissioned American nuclear air base"), but I daresay that I just didn't stretch my imagination in the right direction.

There were two winners:
(I think the judging panel couldn't decide. There was only meant to be one winner! )

My heartfelt congratulations go to both deserving winners. And my gratitude to the organisers for allowing me to participate in the event - even if I did feel a little out of place!

Email ThisBlogThis!Share to TwitterShare to FacebookShare to Pinterest
Labels: Exhibition