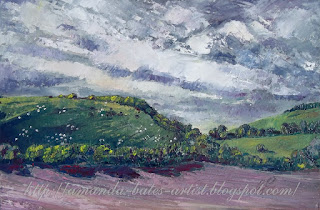 This painting is a commission. The lady who asked me to paint it liked a previous painting of Watership Down, and specifically requested grey sky and sheep.

The grey sky was no trouble, but were there any sheep up on that down this October? Well, if there were, they hid whenever I was in the vicinity.

Fortunately, I had my reference photographs, and the painting, from 2011. And, of course, even at the larger scale requested, sheep on a hillside two or three fields distant are little more than slightly off-white blobs. It's just the scale and the distribution that needs care.

Watership Down (4) was painted in the studio (well, it would have been if I had such a thing. It was actually the living room, using the big studio easel that usually hides conspicuously in a corner) from a elements of several photographs. I made several trips out to the down with a camera, looking for sheep and interesting angles. If the former were absent, the latter were not. The pass between Watership Down and Ladle Hill is lovely, and I was pleased to be able to extend the image to the West to include more of the latter hill.

This was a box canvas, and - to save time and anguish - I decided to paint the edges in fast-drying acrylic. This extended into an underpainting, which can be seen below left. The second "in progress" image is the painting as it was at the end of the first day; it's very nearly finished, apart from sheep and a little tidivation.